Governments and the mainstream media are fond of reporting inflation figures that strip out things no one ever uses like food and energy. As anyone who follows these things knows, leaving out “volatile” categories that track meaningless price movements in the things people eat and the commodities humans burn to sustain themselves is key when it comes to accurately tracking inflation which is why we can’t exactly sympathize with the following, that seems to indicate that even though everyone with a PhD in economics knows that endless money printing does not lead to inflation, people who aren’t rich are somehow managing to spend a greater percentage of their income on food and housing.

For many Americans, the rise in food and housing prices is a tough squeeze. That’s because—even in an era with low overall inflation—low-income Americans spend a disproportionate share of their money on food and housing.

New data from the Labor Department show the extent of the discrepancy. The bottom 10% of Americans, by income, devote 42% of their spending to housing and an additional 17% to food–nearly 60% of their total spending, according to the Consumer Expenditures Survey. By contrast, the wealthiest 10% of Americans dedicate only 31% of their spending to housing and 11% to food–closer to 40% of total spending…

This underscores one reason that inflation feels different household to household: People spend their money in such different ways. A parent with children in college or daycare might scoff at the notion that inflation has been low for the last five years. Conversely, someone with no car payment and no mortgage but who does a lot of driving may be feeling flush from the plunge in gas prices.

Yes, “different from household to household.” So what you’re saying is that if things like your child’s education actually have to be paid for with real wages, you may think differently about your economic circumstances than someone who has no mortgage and who “does a lot of driving” in a Bentley that was paid for in cash but which ends up sucking a lot of gas because its V-8 churns out 500 horsepower. Got it. And as it turns out, the poorest 10% of US households foolishly and habitually choose to spend 60% of their meager earnings on housing and food whereas the top 10% of earners apparently understand that, while necessary, putting a roof over one’s head and eating shouldn’t be allowed to take up too much of one’s earnings because if left unchecked, such expenditures can eat into resources that should by all rights be reserved for vacation home purchases. 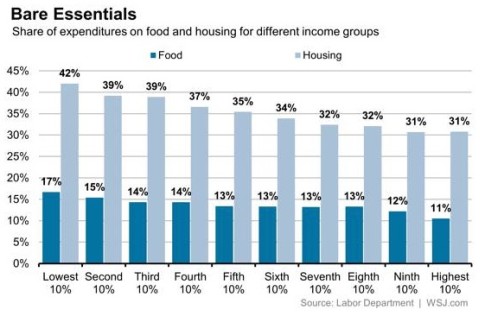 Curiously, WSJ also notes that the poorer you are, the more you depend on the government and incredibly, it turns out that there’s a correlation between being rich and spending money:

The poorest 10% receive more public assistance than any other group. The second 10% receive more than half their income from Social Security and retirement programs. The third and fourth 10% also receive large shares of their income from retirement programs, suggesting that retirees make up a large share of the lower-middle part of the income distribution… 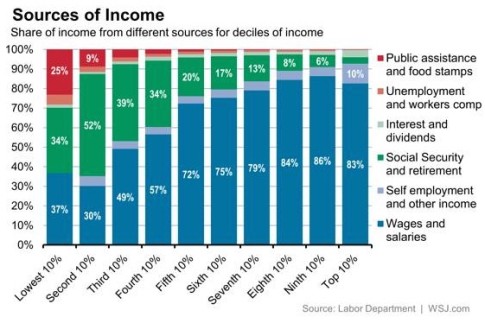 And while this certainly appears to paint a rather vivid picture of wealth inequality in America, WSJ does note that “the consumer expenditures survey is not perfect” — and neither is a system where the bottom rung of society spends 20% more of their vastly lower income on staying alive than the country’s elite.