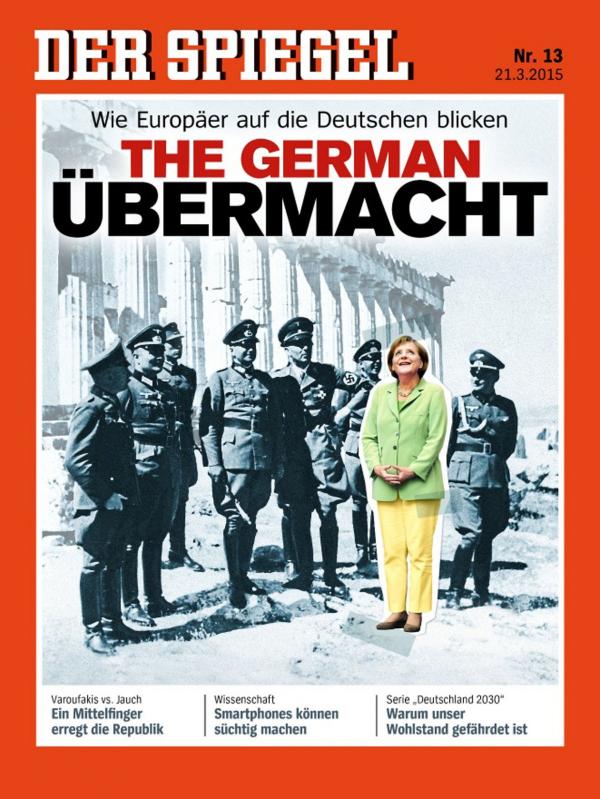 – Greece Calculates Germany Owes It A Third Of Its GDP In WWII Reparations (ZeroHedge, April 6, 2015):

With almost 70% of Europeans already believing that Greece is a drag on the EU economy, this morning’s statement by Greek Alternate Finance Minister Dimitris Mardas – coming just a week after the war-raparations committee was set-up, telling lawmakers in Parliament that he has calculated that Germany owes Greece EUR 278.7 billion in World War II reparations, will surely deepen the rift (at almost 40% of Germany’s EUR 735 billion GDP) whether right or wrong.

The claim was calculated by Greece’s General Accounting Office, which has collected archival material.

This includes a EU10.3b repayment of loan country was forced to make to Germany during Nazi occupation…

Another legal issue that has surfaced concerns the 476 million reichsmarks lent against its will to Germany by the Greek National Bank during the war. If this were to be considered a form of war damage, then in principle it would be subject to reparation — except that according to the 1990 treaty, Germany would not have to pay it.

If the money were, however, to be considered a normal credit, then Greece would be entitled to get the money back. The problem is this: even partial recognition of such a debt would create a precedent that could bring untold claims in its wake.

A Greek parliamentary committee set up by Prime Minister Alexis Tsipras’s government to demand reparations for the Nazi occupation of Greece began work on Wednesday, in a move likely to heighten tensions between Athens and Berlin.

Greece’s emotive campaign for war damages has been waged for decades by governments and private citizens alike. But it has gained momentum in recent years as Greeks suffered under the German-backed austerity imposed by the European Union and the International Monetary fund in exchange for financial bailouts.

The committee that began work today will claim German debts include war reparations, the repayment of the so-called occupation loan that Nazi Germany forced the Bank of Greece to make and the return of stolen archaeological treasures.

Tsipras has accused successive German governments of using legal tricks to avoid paying compensation. Germany dismisses the claims as a distraction from Greece’s financial difficulties. It says it has honoured its obligations, including a 115 million- deutsche mark (60 million euros) payment to Greece in 1960.

Relations between the two countries have frayed since Tsipras’s government took power in January seeking to ditch previously agreed bailout promises of austerity measures such as steep cuts to wages and pensions.

The Nazi theme is popular among Greek media in taking potshots at Germany, the country’s biggest creditor. German officials like Chancellor Angela Merkel and Finance Minister Wolfgang Schaeuble have been depicted in Nazi uniforms or with Hitler moustaches.

Hundreds of villages were destroyed, thousands of civilians executed and huge sums looted from the Greek central bank during the Nazi occupation. The Greek government has not officially quantified its reparation claims.