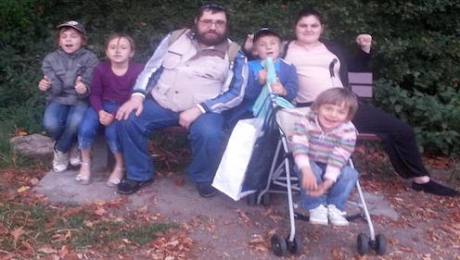 “Our family was robbed and crushed by Israel. We returned to Germany with absolutely nothing but the most important thing we had: our lives.”

“We will never return to Israel ever. We are grateful to the German authorities for our salvation. Israel is a cruel and merciless country… “

Binyamin Netanyau has been very vocal in urging Jews around the world to go to Israel, which he claimed is the best place, the safest place, the only place for Jewish people to live.

Hana Gan, a pregnant Canadian woman, believed it and became trapped. More stories like hers are coming in, and we now learn that another Jewish family – this time from Germany – wants to give a stark warning: Do not move to Israel.

Below is a verbatim translation of the Knyazhinsky family’s testimony, as the family prepares to take legal action against police and social workers in Israel.

In January 2012, in our town in Hamburg, a meeting took place that was initiated by the Jewish Agency with the aim of persuading the German Jewish people to emigrate to Israel, under a programme called Naale. The meeting was chaired by Sergey Cherniac.

It was always my dream to give my children a better education, and they had already attended a Yeshiva Orthodox [Jewish] school in Berlin.

“From the minute we arrived, the authorities started to cheat us”

The Jewish Agency tried to persuade us to emigrate to Israel. It claimed that my children had no future in Germany, that their only future was in Israel, and that if the kids studied in a Yeshiva they would not have to join the Israeli army. Our family would have a great opportunity to learn a new profession. It also promised that our family – a big one – would get an apartment from Amidar, which is an Israeli company responsible for government and subsidised housing. Our children would go to kindergarten, and we were told the educational standard in Israel was much higher than in Germany and that education would be free.

In addition, the Jewish Agency claimed that the Israeli healthcare system was the best in the world and that our family would be given discounts and benefits. It said that it would provide funds for electrical appliances and that, after we finished our study in the Ulpan [where Jewish immigrants to Israel learn the basic language skills of conversation, writing and comprehension] we would be given a cheque for 3,000 shekels [about USD 756]. Medicine and medical care would be free as in Germany and our children would be much happier in a new environment in their new homeland – Eretz Israel.

The Jewish Agency representative promised us they will bring our possessions in a 10-tonne container. However, after the container was moved to Sefad, our belongings were stolen by the Israelis! All of my children, with the exception of my eldest daughter, were born in Germany and German was their mother tongue.

From the minute we arrived, the authorities started to cheat us. It had been agreed beforehand that we would be placed in Afula [the former Arab village al-Afuleh, just north of the occupied West Bank]; that the children would continue to learn in German and that we, the parents, would get new jobs in intelligence. Instead, they put us in a town called Katzrin in the middle of nowhere in the [occupied Syrian] Golan Heights – hours from any major town or city – and promised us that after we learned Hebrew in the Ulpan, would we be moved to Afula to stay.

The representatives of the Ministry of Immigrant Absorption in Katzrin said that, by the order of the Katzrin mayor, families with six or more kids would be given four-room apartments, comprising a living room and three bedrooms, by Amidar, but that the apartment would be given only after we reside in Katzrin for a minimum of seven to eight months.

My daughter and I worked for two months in a kibbutz in the Golan Heights and didn’t rest for a minute. We had brought with us from Germany belongings worth almost 20,000 euros [USD 21,626] – a fridge, a washing machine, a dishwasher, and so on. In other words, everything we would need for the first five years, plus 15,000 euros [USD 16,244] in cash.

Beaten, arrested and charged without evidence

Then, in March 2013 in Katzrin, I tried to find a volunteer who had helped us to open a bank account so he can assist us with an appeal to Amidar concerning an apartment. When I couldn’t find the volunteer, someone recommended that I go and see a woman called Sonya Kogen who would help me and my wife with the appeal. After I met her, I discovered that she was a social worker with the welfare department. She demanded that I sign a document stating that we were destitute. Obviously, I refused because we were not destitute, and we left the office.

After working a shift in the factory, when I went to take the kids to school, Sonya Kogen called me and, in a very rude and abrasive manner, demanded that I go back to see her and threatened that, if I refused, she would bring a police escort to force me to see her.

At this point I did not understand what she was accusing me of. I had no idea. The next day I went to her and she started to threaten me, claiming that I beat my children and that her people had heard that. Again, she asked me to sign the papers and, again, I refused.

A month later I was called in by the police for questioning. An investigator called Zion, assisted by a German translator, interrogated me for three hours. I was shouted at and accused of beating my son and threatening the social workers. I denied everything, and the investigator released me after taking my fingerprints and threatening that he would show me that Israel is not Germany.

I realised that we were in distress and I went to look for an apartment in Sefad, because I felt the religious community there was a safer place for my family. On 10 July 2013, while I was at work, a police car arrived and arrested me. They threw me onto the ground and tied up my hands and legs.

At the police station they told me they were charging me on the basis of a social worker’s testimony that I was beating my son Joseph. There was no evidence or other testimonies, apart from Sonya Kogen’s word.

Joseph was in fact terrified of the social worker; my elder son, Benjamin, who was looking after Joseph saw his little brother run away and hide in a different room. Joseph cried and told Benjamin that the social worker had abused him.

The police threw me into jail for 56 days without proof or trial. In Israel, the police can do this on the order of a judge for a maximum of one year and one day, just on the basis of suspicion. They claimed that Joseph had made the complaint himself. They took him away for psychiatric evaluation and declared that he had mental health issues.

An investigator brought me from the jail to the police station and, together with my whole family, we were abused by the police. The investigator locked the door of the room I had been put in and beat me up badly. I was saved by another policeman and taken back to prison. After I was released from jail we ran away to Sefad. However, we were hounded even there, so we bought plane tickets to return to Germany.

On 3 February 2014 we quietly escaped Israel in order to protect ourselves from the monsters, the social workers. My daughter Esther stayed behind in order to sell our belongings and bought her own ticket for 24 February 2014.

But someone reported that she had money and a BB gun belonging to her brother, Leon, which she gave as a gift to one of the buyers. On the evening of her flight, the police burst into her apartment, handcuffed her and accusing her of being a criminal and a gun dealer. She said the gun was from Germany and not declared as a weapon because it was a toy. This didn’t help her. The police took all her money – 10,000 shekels [USD 2,522] – and only then released her. She missed her flight and she went and hid in a friend’s home. She had to sell all her jewellery to buy a new ticket and escape.

Esther swore that even her ghost will not be in Israel. Our family was robbed and crushed by Israel. We returned to Germany with absolutely nothing but the most important thing we had: our lives. My son, Joseph, needed psychiatric treatment because of the trauma. He was treated in an institution in Germany for four months.

Upon our return to Germany, our family received immediate help from the social services, who were horrified to see the condition we were in. We received a warm welcome and were given money for food.

The next day we were provided with a beautiful three-room apartment, provided with mattresses, bedding and utensils. We were helped as refugees from Israel. We received full social security benefits.

Esther still works and lives with the family. The German authorities provided everything we could wish for, including access to kindergartens and schools, all for free.

We are so happy to be back in a safe country. We are fine now, except that our eldest son, Leon, left us because he can’t forgive the fact that we took him to Israel.

My wife is so disappointed. She hates Israel now. We will never return to Israel ever. We are grateful to the German authorities for our salvation. Israel is a cruel and merciless country…

We will be eternally grateful to Germany for rescuing and saving our family on return from Israel – like refugees from a war.

These are the words of a deeply religious family that bought into the idea of Israel being the best place for Jews to live. It is hardly possible to begin to imagine the horror this family faced, yet thousands of Israeli people face the same issues daily. False claims are quickly acted upon, with little evidence.

As more and more people come forward with their own personal stories, there is a similar thread to all of them. False claims are rampant, and the state intervenes too quickly with little or no evidence.

Individuals and families are faced with a nightmare, and believing in the truth will not save them.