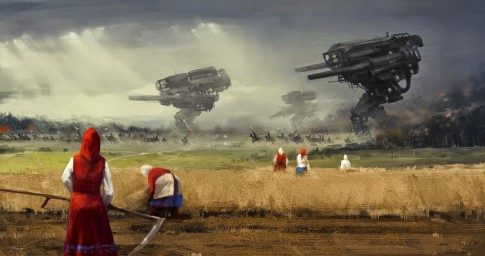 The story is the same every time: some nation, due to a confluence of lucky circumstances, becomes powerful—much more powerful than the rest—and, for a time, is dominant. But the lucky circumstances, which often amount to no more than a few advantageous quirks of geology, be it Welsh coal or West Texas oil, in due course come to an end. In the meantime, the erstwhile superpower becomes corrupted by its own power.

As the endgame approaches, those still nominally in charge of the collapsing empire resort to all sorts of desperate measures—all except one: they will refuse to ever consider the fact that their imperial superpower is at an end, and that they should change their ways accordingly. George Orwell once offered an excellent explanation for this phenomenon: as the imperial end-game approaches, it becomes a matter of imperial self-preservation to breed a special-purpose ruling class—one that is incapable of understanding that the end-game is approaching. Because, you see, if they had an inkling of what’s going on, they wouldn’t take their jobs seriously enough to keep the game going for as long as possible.

The approaching imperial collapse can be seen in the ever worsening results the empire gets for its imperial efforts. After World War II, the US was able to do a respectable job helping to rebuild Germany, along with the rest of western Europe. Japan also did rather well under US tutelage, as did South Korea after the end of fighting on the Korean peninsula. With Vietnam, Laos and Cambodia, all of which were badly damaged by the US, the results were significantly worse: Vietnam was an outright defeat, Cambodia lived through a period of genocide, while amazingly resilient Laos—the most heavily bombed country on the planet—recovered on its own.

The first Gulf War went even more badly: fearful of undertaking a ground offensive in Iraq, the US stopped short of its regular practice of toppling the government and installing a puppet regime there, and left it in limbo for a decade. When the US did eventually invade, it succeeded—after killing countless civilians and destroying much of the infrastructure—in leaving behind a dismembered corpse of a country.

Similar results have been achieved in other places where the US saw it fit to get involved: Somalia, Libya and, most recently, Yemen. Let’s not even mention Afghanistan, since all empires have failed to achieve good results there. So the trend is unmistakable: whereas at its height the empire destroyed in order to rebuild the world in its own image, as it nears its end it destroys simply for the sake of destruction, leaving piles of corpses and smoldering ruins in its wake.

Another unmistakeable trend has to do with the efficacy of spending money on “defense” (which, in the case of the US, should be redefined as “offense”). Having a lavishly endowed military can sometimes lead to success, but here too something has shifted over time. The famous American can-do spirit that was evident to all during World War II, when the US dwarfed the rest of the world with its industrial might, is no more. Now, more and more, military spending itself is the goal—never mind what it achieves.

And what it achieves is the latest F-35 jet fighter that can’t fly; the latest aircraft carrier that can’t launch planes without destroying them if they are fitted with the auxiliary tanks they need to fly combat missions; the most technologically advanced AEGIS destroyer that can be taken out of commission by a single unarmed Russian jet carrying a basket of electronic warfare equipment, and another aircraft carrier that can be frightened out of deep water and forced to anchor by a few Russian submarines out on routine patrol.

But the Americans like their weapons, and they like handing them out as a show of support. But more often than not these weapons end up in the wrong hands: the ones they gave to Iraq are now in the hands of ISIS; the ones they gave to the Ukrainian nationalists have been sold to the Syrian government; the ones they gave to the government in Yemen is now in the hands of the Houthis who recently overthrew it. And so the efficacy of lavish military spending has dwindled too. At some point it may become more efficient to modify the US Treasury printing presses to blast bundles of US dollars in the general direction of the enemy.

With the strategy of “destroying in order to create” no longer viable, but with the blind ambition to still try to prevail everywhere in the world somehow still part of the political culture, all that remains is murder. The main tool of foreign policy becomes political assassination: be it Saddam Hussein, or Muammar Qaddafi, or Slobodan Milošević, or Osama bin Laden, or any number of lesser targets, the idea is to simply kill them.

While aiming for the head of an organization is a favorite technique, the general populace gets is share of murder too. How many funerals and wedding parties have been taken out by drone strikes? I don’t know that anyone in the US really knows, but I am sure that those whose relatives were killed do remember, and will remember for the next few centuries at least. This tactic is generally not conducive to creating a durable peace, but it is a good tactic for perpetuating and escalating conflict. But that’s now an acceptable goal, because it creates the rationale for increased military spending, making it possible to breed more chaos.

Recently a retired US general went on television to declare that what’s needed to turn around the situation in the Ukraine is to simply “start killing Russians.” The Russians listened to that, marveled at his idiocy, and then went ahead and opened a criminal case against him. Now this general will be unable to travel to an ever-increasing number of countries around the world for fear of getting arrested and deported to Russia to stand trial.

This is largely a symbolic gesture, but non-symbolic non-gestures of a preventive nature are sure to follow. You see, my fellow space travelers, murder happens to be illegal. In most jurisdictions, inciting others to murder also happens to be illegal. Americans have granted themselves the license to kill without checking to see whether perhaps they might be exceeding their authority. We should expect, then, that as their power trickles away, their license to kill will be revoked, and they find themselves reclassified from global hegemons to mere murderers.

As empires collapse, they turn inward, and subject their own populations to the same ill treatment to which they subjected others. Here, America is unexceptional: the number of Americans being murdered by their own police, with minimal repercussions for those doing the killing, is quite stunning. When Americans wonder who their enemy really is, they need look no further.

But that is only the beginning: the precedent has already been set for deploying US troops on US soil. As law and order break down in more and more places, we will see more and more US troops on the streets of cities in the US, spreading death and destruction just like they did in Iraq or in Afghanistan. The last license to kill to be revoked will be the license to kill ourselves.