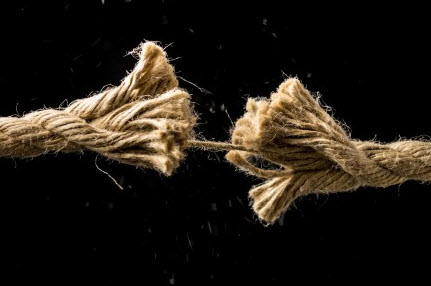 Does anyone else have the feeling that things are not just unraveling, but that the unraveling is gathering speed?
Though quantifying this perception is more interpretative than statistical, I think we can look at the ongoing debt crisis in Greece as an example of this acceleration of events.
The Greek debt crisis began in 2011 and reached a peak in 2012. The crisis was quelled by new Eurozone/IMF loans to Greece, and European Central Bank chief Mario Draghi’s famous “whatever it takes speech” in late July, 2012.
The Greek debt crisis quickly went from “boil” to “simmer,” where it stayed for almost two-and-a-half years. But no one with any knowledge of the gravity and precariousness of the situation expects the latest “extend and pretend” deal to patch everything together for another two years.  Current deals are more likely to last a matter of months, not years.
We can discern the same diminishing returns in Federal Reserve/central bank interventions, as the initial rounds of quantitative easing pushed stock and bond markets higher for years at a time, while the following interventions generated lower returns.
What factors are reducing the positive effects of intervention and causing increased volatility? Let’s start with the engine behind every central bank/state intervention and every “save” of the status quo: debt.

Debt has one primary dynamic: borrowing money to consume something in the present brings forward consumption and income.  Economists describe trading future income for consumption today as bringing consumption forward. And since debt must be repaid with interest, bringing consumption forward also brings income forward.
Let’s say we want to buy a vehicle with cash, and it will take five years to save up the lump-sum purchase cost.  We forego current consumption to save for future consumption.
If we get a 100% auto loan now, we get the use of the vehicle (present-day consumption) and in exchange, we sacrifice some of our income over the next five years to pay back the auto loan. We brought consumption forward, and in essence took future income and brought it forward to pay for the consumption we’re enjoying today.
We can best understand the eventual consequence of this dynamic with a simplified household example. Let’s say a household has $2,000 a month in net income, i.e. after taxes, healthcare insurance deductions, etc., and rent (or mortgage payments), basic groceries and utilities consume $1,000 of this net income. That leaves the household with $1,000 in disposable income.
At the risk of boring finance-savvy readers, let’s briefly cover the difference between net income and disposable income. Net income can be earned (wages, salaries, net income from a sole proprietor enterprise, etc.) or unearned (dividends, interest income, rents, etc.) Net income can only rise by making more money or reducing taxes. There are limits to our control of these factors. In a stagnant economy, it’s tough to find better-paying jobs and harder to demand higher wages from employers.  Since governments’ expenditures are rising, taxes are also going up; it’s difficult for most wage-earners to cut their total tax load by much.
Disposable income is more within our control, as it is fundamentally a series of trade-offs between current consumption and future income/savings: if we choose to consume now, we have less income to save for future consumption or investments.  If we sacrifice consumption today, we have more money in the future for consumption or investing. If we borrow money to consume today, we’ll have less future income because a slice of our future income must be devoted to pay down the debt we took on to consume today.
If our household borrows money to buy a vehicle and the payment is $500 per month, the household’s disposable income drops from $1,000 to $500. If the household takes on other debt (credit cards, student loans, etc.) with payments of $500 per month, the household’s disposable income is zero: there is no money left to dine out, go to movies, pay for lessons, etc.
In effect, all of the future income for years to come has been spent.

The Only Trick To Expand Debt: Lower Interest Rates

There are only two ways to support additional debt: either increase net income, or lower the rate of interest on new and existing loans to free up disposable income.  Suppose our household refinances its auto loan to a much lower rate of interest and transfers its credit card debt to a lower-interest rate card.  Huzzah, each monthly payment drops by $100, and the household has $200 of disposable income to spend on current consumption or on more loans. Let’s say the household chooses to buy new furniture on credit with the windfall. This new consumption brought forward pushes the monthly debt payments back up to $1,000.
This additional debt-based consumption profits two critical players in the economy: the state (i.e. all levels of government) and the financial sector. The state benefits from the higher taxes generated by the sales, and the financial sector profits from transaction fees and the interest earned on the new loans.
The household’s consumption and debt rose as a result of lower interest rates, but there is a limit on this dynamic: lenders have to charge enough interest to service the loan, reap a profit and compensate shareholders for the risk of default.
If lenders fail to properly assess the risk of default. They will be unprepared to absorb the losses incurred as marginal borrowers default en masse. This places the lender’s own solvency at risk.
Using this trick to enable further expansion of debt thus creates a systemic risk that borrowers will over-borrow and lenders will not have sufficient reserves to absorb the inevitable losses as marginal borrowers default and other borrowers suffer declines in disposable income that trigger further defaults.
In other words, the trick of lowering interest rates yields diminishing returns: the more debt that is enabled,  the thinner the margins of safety and thus the greater the systemic risks rise in direct correlation with rising debt loads.

While lowering interest rates increases disposable income and enables an expansion of debt, it also generates a disincentive for households to forego current consumption by saving disposable income rather than spending it.  Near-zero interest rates actively punish savers by reducing the interest income earned on low-risk savings accounts and certificates of deposit (CDs) to near-zero. Savers are pushed into either investing in high-risk markets that benefit the financial sector or by spending rather than saving—a choice that benefits the state, as more spending generates taxes for the state.

The Global Expansion Of Debt Has Increased Systemic Risks

These are the basic dynamics of the entire global economy: interest rates have been pushed to near-zero to punish savers and encourage expansion of debt-based consumption. But this inevitably leads to a reduction in disposable income and current consumption, as debt brings forward both consumption and income.
Once the borrowers have maxed out their borrowing power, there is no more expansion of debt or additional debt-based consumption.  This is known as debt saturation: flooding the financial sector with more credit no longer boosts borrowing or brings consumption forward.
Those who brought their consumption forward can no longer add to present consumption, as their future income is already spoken for.
That’s where the global economy finds itself today. 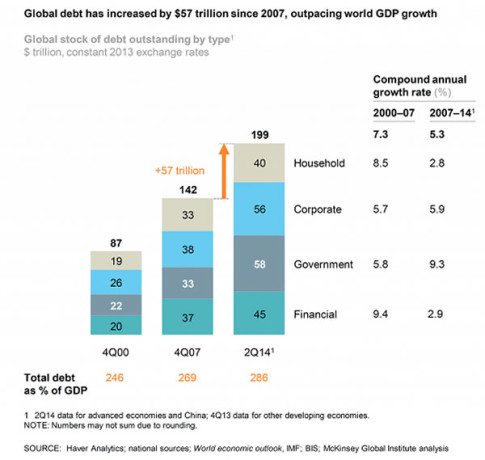 This vast expansion of debt on the backs of marginal borrowers and the expansion of risky investments has greatly increased the systemic risk of losses from defaults arising from over-extended borrowers.
No wonder every attempt to further expand debt-based consumption is yielding diminishing returns: net income is stagnant virtually everywhere in the bottom 95% of the populace, and further declines in interest rates are increasingly marginal as rates are near-zero everywhere that isn’t suffering a collapse in its currency.
The diminishing returns manifest in three ways: the gains from each round of central-bank tricks are declining, the periods of stability following the latest “save” are shrinking and the amplitude of each episode of debt crisis is expanding.
That the unraveling is speeding up is not just perception—it’s reality.
In Part 2: The Coming Age Of Confiscation, we’ll look at the threat of the other fundamental driver of rising instability: the broken-logic TINA (there is no alternative) mind trap our global leaders are mired in. As the trajectory of the status quo worsens for all the reasons discussed above, government will become increasingly heavy-handed in appropriating the remaining wealth in order to keep things stumbling on just a little bit longer — justifying its actions by claiming it “has no other choice”.
Click here to read Part 2 of this report (free executive summary, enrollment required for full access)
This essay was first published on peakprosperity.com, where I am a contributing writer.

1 thought on “The Unraveling Is Gathering Speed”