“What are we going to negotiate about? What I would say is, ‘Listen, you see that desert out there? I want to show you something,’” Adelson said at Yeshiva University. “You pick up your cellphone, and you call somewhere in Nebraska, and you say, ‘okay, let it go.’ So there’s an atomic weapon goes over — ballistic missiles — in the middle of the desert that doesn’t hurt a soul.”

Adelson continued: “Then you say, ‘See? The next one is in the middle of Tehran.’ So, we mean business. You want to be wiped out? Go ahead and take a tough position and continue with your nuclear development.

– From the Washington Post article: Adelson: Obama Should Fire Nuke to Send Message to Iran

That a handful of extraordinarily rich and powerful oligarchs as well as mega-corporations have completely hijacked the American political process is hardy news. It’s been the key topic of discussion here at Liberty Blitzkrieg and elsewhere for many years (see: New Report from Princeton and Northwestern Proves It: The U.S. is an Oligarchy).

What makes their control so effective is the use of an army of lobbyists, lawyers, Super PACs and bought and paid for politicians to do their dirty work, thus employing an opaque network of well-heeled minions created to conceal who is really pulling the strings.

Of all the commentary written about Netanyahu’s embarrassing political stunt in front of the U.S. Congress last week, the most important angle was largely overlooked. That is, it sort of represented a coming out party for the American oligarch from behind the curtain.

Sheldon Adelson, by all accounts a vile and violent sort of the worst kind, has made entirely controlling the Republican party his lifelong achievement. Additionally, and quite significantly to U.S. and Israeli citizens, Mr. Adelson has transformed himself into the puppet-master behind Benjamin Netanyahu. Just so there’s no misunderstanding about who Sheldon Adelson is, let’s revisit a post from last year titled, Inside the Mind of an Oligarch – Sheldon Adelson Proclaims “I Don’t Like Journalism”. Here’s an excerpt:

Billionaire casino mogul and conservative donor Sheldon Adelson said Sunday that the Palestinians are a made-up nation which exists solely to attempt to destroy Israel.

At the conference, which also featured top Democratic funder Haim Saban, Adelson also said Israel would not be able to survive as a democracy: “So Israel won’t be a democratic state, so what?” he asked Saban, adding that democracy, after all, is not mentioned in the Torah,and recommended that the country build a “big wall” to protect itself, saying, “I would put up a big wall around my property.”

Saban and Adelson should buy The New York Times together in an effort to bring more “balance” to the newspaper’s coverage of Israel and the Middle East, Adelson suggested to wild applause.

Bill Moyers recently hit the nail on the head when it comes to Sheldon Adelson and his war catalyzing puppet, Benjamin Netanyahu. He writes:

Everything you need to know about Israeli Prime Minister Benjamin Netanyahu’s address to Congress Tuesday was the presence in the visitor’s gallery of one man – Sheldon Adelson.

The gambling tycoon is the Godfather of the Republican Right. The party’s presidential hopefuls line up to kiss his assets, scraping and bowing for his blessing, which when granted is bestowed with his signed checks. Data from both the nonpartisan Center for Responsive Politics and the Center for Public Integrity show that in the 2012 election cycle, Adelson and his wife Miriam (whose purse achieved metaphoric glory Tuesday when it fell from the gallery and hit a Democratic congressman) contributed $150 million to the GOP and its friends, including $93 million to such plutocracy-friendly super PACs as Karl Rove’s American Crossroads, the Congressional Leadership Fund, the Republican Jewish Coalition Victory Fund, Winning Our Future (the pro-Newt Gingrich super PAC) and Restore Our Future (the pro-Mitt Romney super PAC).

Yet there’s no knowing for sure about all of the “dark money” contributed by the Adelsons – so called because it doesn’t have to be reported. Like those high-rise, multi-million dollar apartments in New York City purchased by oligarchs whose identity is hidden within perfectly legal shell organizations, dark money lets our politicians conveniently erase fingerprints left by their ink-stained (from signing all those checks) billionaire benefactors.

Adelson owns the daily Israel Hayom, a leading newspaper, as well as Makor Roshon, the daily newspaper of Israel’s Zionist religious right and NRG, a news website. He gives Israel Hayom away for free in order to promote his hardline views – the headline in the paper the day after Obama’s re-election was “The US Voted [for] Socialism.”

More important, he uses the paper to bang the drum incessantly for Netanyahu and his right-wing Likud Party, under the reign of which Israel has edged closer and closer to theocracy. As Hebrew University economist Momi Dahan put it: “De facto, the existence of a newspaper like Israel Hayom egregiously violates the law, because [Adelson] actually is providing a candidate with nearly unlimited resources.”

In fact, as Israel’s March 17 election approaches, Adelson has increased the press run of Israel Hayom’s weekend edition by 70 percent. The paper says it’s to increase circulation and advertising, but rival newspaper Ha’aretz reports, “Political sources are convinced the extra copies are less part of a business plan and more one to help Netanyahu’s re-election bid.” Just like the timing of Netanyahu’s “State of the Union” address to Congress this week was merely a coincidence, right? “I deeply regret that some perceive my being here as political,” Netanyahu told Congress. “That was never my intention.” Of course.

So Netanyahu gets the best of both of Adelson’s worlds – his powerful propaganda machine in Israel and his campaign cash here in the United States. Combined, they allow Netanyahu to usurp American foreign policy as he manipulates an obliging US Congress enamored of Adelson’s millions, pushing it further to the right on Israel and the Middle East.

There you have it: Not only is this casino mogul the unofficial head of the Republican Party in America (“he with the gold rules”), he is the uncrowned King of Israel — David with a printing press and checkbook instead of a slingshot and a stone. All of this came to the fore in Netanyahu’s speech on Tuesday: the US cannot determine its own policy in the Middle East and the majority in Congress are under the thumb of a foreign power.

Everything you need to know about Benjamin Netanyahu’s address to Congress Tuesday was the presence in the visitor’s gallery of that man. We are hostage to his fortune.

Don’t forget the quote at the top where he suggested scaring Iran into submission by threatening to drop a nuke on Tehran. Who’s the aggressor again?

This whole thing takes on a much greater level of significance given Adelson’s near total control of the U.S. Republican party, as well as his control over Israel’s Prime Minister. The man is not only the 8th richest man in the world, he’s also a menace to civilized society, and people need to start paying a lot more attention to him.

I think the following illustration from Haaretz sums it up best: 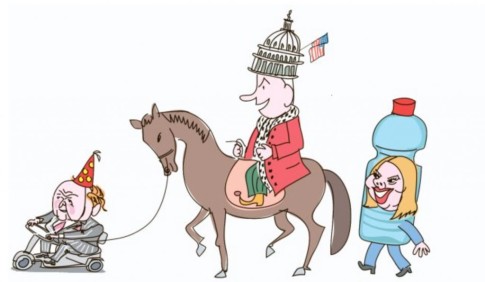