– Sheldon Adelson Is Poised to Give Donald Trump a Donation Boost:

The casino magnate Sheldon G. Adelson told Donald J. Trump in a private meeting last week that he was willing to contribute more to help elect him than he has to any previous campaign, a sum that could exceed $100 million, according to two Republicans with direct knowledge of Mr. Adelson’s commitment.

As significant, Mr. Adelson, a billionaire based in Las Vegas, has decided that he will significantly scale back his giving to congressional Republicans and direct most of his contributions to groups dedicated to Mr. Trump’s campaign. The two Republicans familiar with Mr. Adelson’s plans spoke anonymously because they were not authorized to discuss the matter publicly.

Mr. Adelson’s pledge to Mr. Trump, the presumptive Republican presidential nominee, comes at an opportune time. Mr. Trump has relied on a mix of his own wealth and small-dollar contributions to finance his primary effort and lacks the sort of major donor network needed to sustain him in the general election. Mr. Trump has said that he may need $1 billion for the campaign but has only recently begun scheduling fund-raisers and hiring finance staff members. Many of the Republican Party’s wealthiest contributors, including the billionaire brothers Charles G. and David H. Koch, have indicated they are unlikely to give to his candidacy. 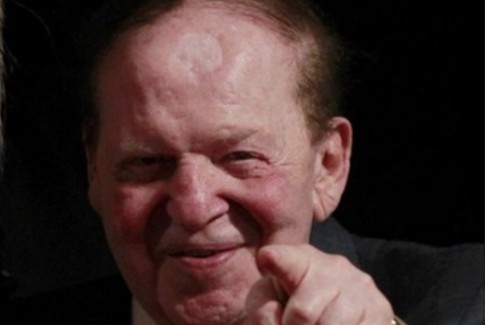 “What are we going to negotiate about? What I would say is, ‘Listen, you see that desert out there? I want to show you something,’” Adelson said at Yeshiva University. “You pick up your cellphone, and you call somewhere in Nebraska, and you say, ‘okay, let it go.’ So there’s an atomic weapon goes over — ballistic missiles — in the middle of the desert that doesn’t hurt a soul.”

Adelson continued: “Then you say, ‘See? The next one is in the middle of Tehran.’ So, we mean business. You want to be wiped out? Go ahead and take a tough position and continue with your nuclear development.

– From the Washington Post article: Adelson: Obama Should Fire Nuke to Send Message to Iran

That a handful of extraordinarily rich and powerful oligarchs as well as mega-corporations have completely hijacked the American political process is hardy news. It’s been the key topic of discussion here at Liberty Blitzkrieg and elsewhere for many years (see: New Report from Princeton and Northwestern Proves It: The U.S. is an Oligarchy).

– Meet the Warmongering Billionaires Who Will Spend a Fortune to Influence the Next President (Alternet, Nov 13, 2014):

Clinton has given backers like Saban ample reason for thinking of her as the perfect candidate for Israel. During the 2008 presidential election, Clinton was asked by ABC’s “Good Morning America” what she would do if Iran used a nuclear weapon on Israel. “In the next 10 years, during which they might foolishly consider launching an attack on Israel, we would be able to totally obliterate them,” she said. This year, in an interview with the Atlantic’s Jeffrey Goldberg, she doubled down on her pro-Israel agenda. “If I were the prime minister of Israel, you’re damn right I would expect to have control over security [in the West Bank],” she said.