Sniper attacks are commonly used as a form of false flag terror.

Former Soviet leader Mikhail Gorbachev says the the killing is aimed at “destabilizing the situation in the country, at heightening confrontation” with the West.

The assassination of Boris Nemtsov is an attempt to complicate the situation in the country, even to destabilize it by ratcheting up tensions between the government and the opposition.

The Saker notes that Putin warned years ago that a false flag of this nature might occur.

Another reason to doubt the “Blame Putin” chorus we are already seeing in the corporate media is the manner in which the shooting took place, in public, in front of the girlfriend, to generate the maximum publicity. If Putin had really wanted to kill this guy, it would have been a “suicide” in private or a small plane crash, the way the US Government handles assassinations.

The Kiev Snipers: Everyone Agrees That They Fired On BOTH SIDES

Random shootings are a type of false flag terror …

For example, in 1985 – as part of the “Gladio” (11-21) false flag operations –  snipers attacked and shot shoppers in supermarkets randomly in Brabant county, Belgium killing twenty-eight and leaving many wounded.

Additionally, shooting both sides is a tip off that it may be a false flag.

Specifically, when authoritarian regimes want to break up protests, they might shoot protesters.

Likewise, when violent protesters shoot government employees, they might be trying to overthrow the government.

But when secretive snipers kill both protesters and the police, it is an indication of a “false flag” attacks meant to sow chaos, anger, disgust and a lack of legitimacy.

This has happened many times over the years. For example:

Snipers Fired At BOTH Police and Protesters In Ukraine

This happened during the Maidan protests which resulted in the overthrow of the Ukrainian government, as well.  Indeed, the ruthless slaughter of people by snipers was the event which turned world opinion against the then-current Ukrainian Prime Minister, and  resulted in him having to flee the country.

BBC recently interviewed the head of the opposition’s security forces at the time, who confirms that snipers were killing both protesters and police:

Former chief of Ukraine’s Security Service has confirmed allegations that snipers who killed dozens of people during the violent unrest in Kiev operated from a building controlled by the opposition on Maidan square.

Shots that killed both civilians and police officers were fired from the Philharmonic Hall building in Ukraine’s capital, former head of the Security Service of Ukraine Aleksandr Yakimenko told Russia 1 channel. The building was under full control of the opposition and particularly the so-called Commandant of Maidan self-defense Andrey Parubiy who after the coup was appointed as the Secretary of the National Security and Defense Council of Ukraine, Yakimenko added.

[Current Ukrainian Health Minister Oleh] Musiy, who spent more than two months organizing medical units on Maidan, said that on Feb. 20 roughly 40 civilians and protesters were brought with fatal bullet wounds to the makeshift hospital set up near the square. But he said medics also treated three police officers whose wounds were identical.

Forensic evidence, in particular the similarity of the bullet wounds, led him and others to conclude that snipers were targeting both sides of the standoff at Maidan — and that the shootings were intended to generate a wave of revulsion so strong that it would topple Yanukovych and also justify a Russian invasion.

And the Estonian foreign minister – after visiting Ukraine – told the EU foreign affairs minister that the Maidan opposition deployed the snipers – and fired on both the protesters and the police – to discredit the former government of Ukraine.

Was It Maidan Who Fired?

While the American media has proclaimed that the sniper fire was definitely from government forces, some of the above-cited sources dispute that claim.

Additionally, BBC reported at the time:

Reporting for Newsnight, Gabriel Gatehouse said he saw what looked like a protester shooting out of a window at the BBC’s Kiev base, the Ukraine Hotel.

And BBC recently interviewed a Maidan protester who admitted that he fired a sniper rifle at police from the Conservatory, and that he was guided by a military veteran within the Maidan resistance. Here are actual pictures a reporter took of Maidan snipers, recently published by BBC: 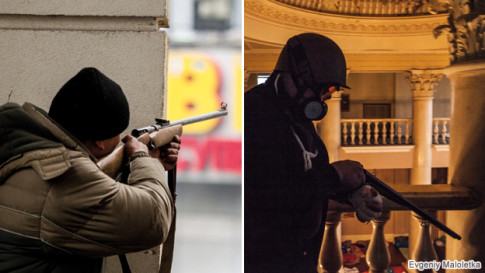 (There were reportedly at least 10 Maidan snipers firing from the Conservatory.)

Volodymyr Parasjuk – the leader in “self-defense units” of the revolution who had called the night of Yanukovich’s escape, on the stage of Maidan to storm the presidential residence one year ago.

On the day of the massacre Parasjuk was staying with his unit in the colonnaded building of the Kiev Conservatory right at the Maidan. In the days before the death toll had risen, and the fighters grew the conviction alone with limited power as before will not be able to overthrow Yanukovych. “There were at that time many guys who said you have to take the weapon and attack,” said Parasjuk recalls. “Many,” he himself had since long ago it had firearms, often their officially registered hunting rifles.

Tagesschau – a German national and international television news service produced by state-run Norddeutscher Rundfunk on behalf of the German public-service television network ARD – also reported in 2014 that at least some of the sniper fire came from protesters.

And there are other photographs of protesters with rifles, such as this one from Reuters: 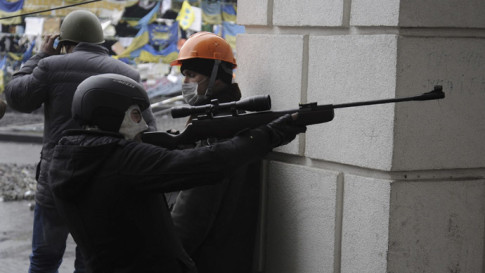 So the snipers might have been Maidan opposition forces shooting their own.

But – whoever the snipers were – the one thing that is clear is that they were shooting people from both as part of a “strategy of tension” to create maximum chaos. This hints that it may ave been a highly-organized campaign of terror.