There are folks in Langley tonight who got a promotion. 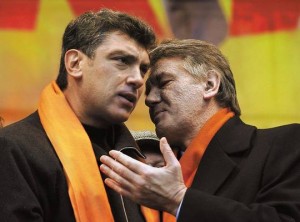 Honestly, I never thought the day would come where I would have anything good to say about the Russian “liberal” or “democratic” “non-system” opposition but apparently this day has come today. To my surprise, all the leaders of this opposition have so far made very moderate and reasonable statement and all those which I have heard have apparently dismissed the notion that the Kremlin was behind the murder. Now this might be self-evident for most of us, but for the Russian “liberal” or “democratic” “non-system” opposition this is quite a change of tone.  Many have even said that this murder was a “provocation” (which in this context means “false flag”!) to destabilize Russia and create a crisis.  Even Irina Khakamada, normally a real crackpot, has said that this was either a “provocation” or the action of a small group of extremists.

Maybe they are aware that the Russian public will not “buy” it, maybe MH17 was too clearly a false flag, or maybe they simply had a momentary moment of decency, but as far as I know nobody pointed the finger at Putin (okay, somebody somewhere probably did, I am just not aware of it).  Again, this is quite remarkable.

Everybody, pro and anti Kremlin, agree that it is absolutely essential that this crime be solved.  Since I personally believe that this was a US/UK organized false flag, I fully expect that somebody will be found and, as we say in Russian, that the “(trail) end will end in the water” meaning that there will be no proof of western involvement.  If fact, even if the FSB *does* come across such proof, the Russians will most likely not make it public but use it behind the scenes.  As for those who organized it, they also need somebody to get caught because if nobody ever gets caught, then this looks way too professional, but if a small cell of, say,  rabid anti-Semitic nationalists, does get caught, then that exculpates all other possible suspects.  Considering that the crime happened 200m away from the Kremlin, and that the city center is laced with cameras, I fully expect an arrest in the next 48 hours, a week max.

The bottom line is that in Russia this false flag is already a clear failure, not even the notorious Russian “liberal” or “democratic” “non-system” opposition wants to touch this thing.  This is very good news indeed.  In the West, of course, this is a different story, the AngloZionist will use that to a max, no doubt here at all.

PS: while we are discussing false flags, I often get the question of why Putin does not say that 9/11 was in inside job even though he must know.  Well, of course he knows, but ask yourself a simple question: why would he say anything?  What would Russia gain from doing this?  This would only further demonize him, and Russia, in the eyes of those who believe the official fairy tale and it would do nothing at all for Putin or Russia.  As for the fact – they are all out in the open, and have been for a long time, just as the JFK murder or Gladio, 7/7, the Bologna railway station bombing, Charlie-Hebdo and all the rest of them.  It is simply not Putin’s job to share info with the western public, his job is to serve the Russian people.  Finally, though I personally doubt it, there is some possibility that some Russian security services were involved in the Moscow apartment bombings on 1999 so Putin might want to tread carefully here lest the US retaliates by revealing what they know.

“So someone killed Boris Nemtsov while the 56 year old man walked with his 22 year old Ukrainian “model” on a bridge in Moscow. There is some CCTV coverage of the crime scene.

As vice-premier under Boris Yeltsin Nemtsov was at least partially responsible for the mafiazation of the Russian economy. Everyone but some oligarchs and the “western” neoliberals was happy when he and the Yeltsin gang had to leave.

After he was kicked out and until yesterday Nemtsov was a very minor opposition politician polling at some 1%. The communists, the real opposition party in Russia, poll at about 20%. No one in the government had reason to care about or fear Nemtsov.”