– This Is What Happens To Gold In A Hyperinflationary Currency Crisis: Ukraine Edition (ZeroHedge, Feb 25, 2015):

As Ukraine’s socio-economic situation goes from wost to worst-er, today’s announcement by President Poroshenko that the government will take actions to stabilize the currency (which as we previously noted, appears to be heading for hyperinflation) has Ukrainians rushing for the exits into precious metals… with only one goal in mind – wealth preservation. 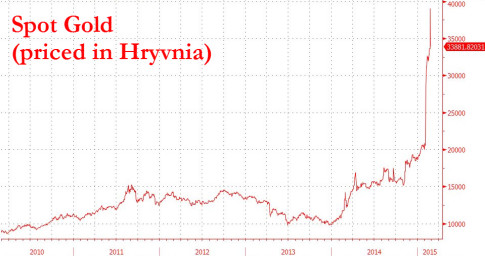 This is what gold does in a fiat-currency crisis. Now if only Ukraine actually still had some gold…

Furthermore, according to RIA, on Tuesday, Ukrainian television channel Ukraina announced that with the new exchange rate, the minimum wage in Ukraine stands at around $42.90 per month, which according to the channel, is lower than in Ghana or Zambia.

There are currently no plans to raise the minimum wage until December.

“Food prices among producers rose 57.1 percent, with the price for grains and vegetables rising 91 percent from January 2014 to January 2015, while the official inflation rate over the period totaled 28.5 percent.

Meanwhile, Ukrainian consumers responded to economic difficulties by cutting their spending in hryvnias by 22.6 percent, which amounts to an almost 40 percent decrease in real consumption.”

Nothing to fear though: we are sure all that hard-earned US taxpayer-lent money will be safe and sound.

1 thought on “This Is What Happens To Gold In A Hyperinflationary Currency Crisis: Ukraine Edition”