“The BBC carried out an extensive two part report on the extent of his abuse at Stoke Mandeville Hospital, North London, but at no time did they mention their own institutional paedophilia nor the fact that they covered up his well known activities in their organisation….WHO US???…SHURLY NOT” 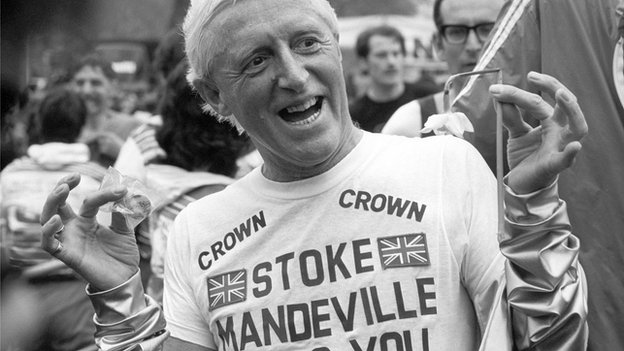 Jimmy Savile abused 63 people connected to Stoke Mandeville Hospital, but one formal complaint was ignored, an independent report has found.

It found Savile’s reputation as a “sex pest” was an “open secret” among some staff – but allegations probably did not reach managers.

The formal complaint – made in 1977 by a victim’s father – should have been reported to police, it added.

A separate report said “elements of the Savile story” could happen again.

The Stoke Mandeville report said the victims, abused from 1968-92, were aged eight to 40.

Health Secretary Jeremy Hunt said people were “too dazzled or too intimidated to confront the evil predator we now know he was”.

Dr Androulla Johnstone, the report’s lead investigator, said the victims were “patients, staff, visitors, volunteers and charity fundraisers” – with almost half aged under 16 and 10 under the age of 12.

“Around one third of his attacks were against patients, just over 90% of the victims were female,” she said.

“The sexual abuse ranged from inappropriate touching to rape.

“Savile was an opportunistic predator who could also on occasions show a high degree of pre-meditation when planning attacks on his victims.”

Savile met Margaret Thatcher, then prime minister, to discuss the funding of Stoke Mandeville’s spinal injuries unit in 1980 – and in the same year was appointed to oversee fundraising and rebuilding of the unit.

Dr Johnstone said supervision of Savile at this time was “absent” and – with “statutory functions… in the hands of a celebrity fundraiser” – government and NHS “lost control” of the project.

The Stoke Mandeville report said the hospital trust had tackled Savile’s power and influence there “head on” from 1991, and managed to “diminish his authority” – but it took until 1999 to “resolve the situation”.

“This says a great deal about the power of the man and the legacy of the historical permissions that had been given to him,” it said.

In another report, also newly published, former barrister and NHS executive Kate Lampard reviewed how Savile could have abused victims at 41 NHS hospitals. 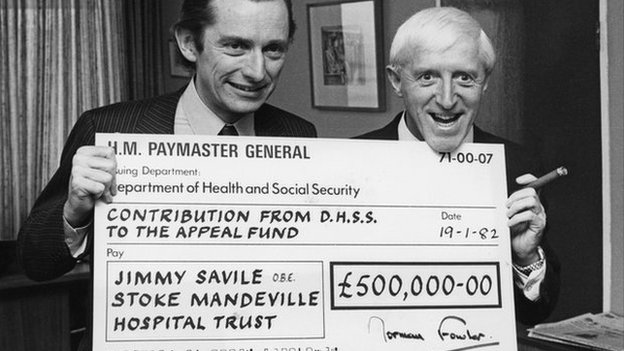 “While it might be tempting to dismiss the Savile case as wholly exceptional, a unique result of the perfect storm of circumstances, the evidence we have gathered indicates that there are many elements of the Savile story that could be repeated in future,” the Lampard report said.

“There is always a risk of the abuse, including sexual abuse, of people in hospitals.

“There will always be people who seek to gain undue influence and power within public institutions including in hospitals.”

The report said society had a “weakness for celebrities” and hospitals must be aware of the risks.