It was just over 12 years ago today when then Secretary of State Colin Powell spoke to the U.N. Security Council on February 5, 2003, and lied to a packed auditorium of world leaders and the entire world, making the case that Saddam Hussein’s Iraq had weapons of mass destruction. 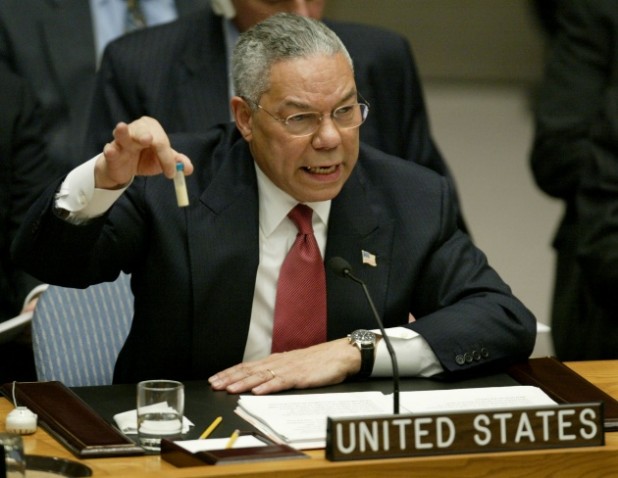 It was only after the second US invasion of Iraq (not to be confused with Obama’s third) that we learned that not only did Saddam not have WMDs, but that the whole invasion was merely a pretext for the US to gain control of yet another middle-eastern regime and one of the largest producers of crude oil at the time. What was also revealed as the NYT Examiner reported is “how easily truth becomes irrelevant in the process of going to war.”

Fast forward a decade, when in precisely the same venue another unabashed warmonger, Israel’s Binyamin Netanyahu, was desperate to launch a war with Iran (hoping the US would fight said war for him) and came up with the now legendary “red-line” threat, demanding that the international community should set a “clear, red line” to stop Iran making a nuclear weapon, a line he claimed would be reached as early as next spring. As the Guardian then reported, Netanyahu presented the UN general assembly in New York with a diagram of a cartoon bomb, complete with a burning fuse, and used a red felt pen to mark a line near the top of the bomb beyond which he said Iran should not be allowed to pass. 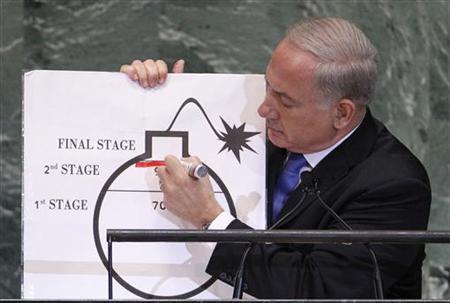 That line, representing 90% of the way to making a warhead, would be reached “by next spring, at most by next summer. Netanyahu added that from there, it’s only a few months, possibly a few weeks, before they get enough enriched uranium for the first bomb.” Consequently, the international community had to make it clear Iran would not be allowed to cross that critical threshold.

Now each day that point is getting closer. And that’s why I speak today with such a sense of urgency, and that’s why everyone should have a sense of urgency,” he said. “I believe that, faced with a clear red line, Iran will back down,” the Israeli leader added, arguing that would give more time for sanctions and diplomacy to work towards the dismantling of the Iranian programme.

And now we know that just like Colin Powell before him, and countless other leaders of the “free world” using the UN as a venue for their factless warmongering, Netanyahu also lied to the entire world.

We know this because earlier today, in another historic Snowden-type whistleblower leak – one of the biggest such spy leaks in recent times – in which of hundreds of dossiers, files and cables from the world’s major intelligence services including Mossad were unveiled by the Guardian and al-Jazeera (yes, the leakers trusted al-Jazeera more than any US media outlet), it was revealed that Binyamin Netanyahu’s dramatic declaration to world leaders was contradicted by his own secret service, according to a top-secret Mossad document.

As the Guardian, one of the two leak outlets reports, in a secret report shared with South Africa a few weeks later, Israel’s intelligence agency concluded that Iran was “not performing the activity necessary to produce weapons”. The report highlights the gulf between the public claims and rhetoric of top Israeli politicians and the assessments of Israel’s military and intelligence establishment.

It also means the Israel leader, who no doubt had all the information Mossad did, lied to the members of the UN assemble and the entire world, with the clear intent of ultimately launching war which would lead to the death of thousands of innocent people and untold destruction.

The timing of the leak couldn’t be worse for the belligerent, warmongering prime minister of Israel:

The disclosure comes as tensions between Israel and its staunchest ally, the US, have dramatically increased ahead of Netanyahu’s planned address to the US Congress on 3 March.

The White House fears the Israeli leader’s anticipated inflammatory rhetoric could damage sensitive negotiations between Tehran and the world’s six big powers over Iran’s nuclear programme. The deadline to agree on a framework is in late March, with the final settlement to come on 30 June. Netanyahu has vowed to block an agreement he claims would give Iran access to a nuclear weapons capability.

Of course, now any statement by Bibi about Iran’s nuclear weapons capability will be the souce of much laughter, if not at the US Congress, a place which itself has used countless lies to start its own wars.

What else did the leaks contain? The documents, almost all marked as confidential or top secret, span almost a decade of global intelligence traffic, from 2006 to December last year. It has been leaked to the al-Jazeera investigative unit and shared with the Guardian.

The papers include details of operations against al-Qaida, Islamic State and other terrorist organisations, but also the targeting of environmental activists.

The files reveal that:

The cache, which has been independently authenticated by the Guardian, mainly involves exchanges between South Africa’s intelligence agency and its counterparts around the world. It is not the entire volume of traffic but a selective leak.

One of the biggest hauls is from Mossad. But there are also documents from Russia’s FSB, which is responsible for counter-terrorism. Such leaks of Russian material are extremely rare.

Other spy agencies caught up in the trawl include those of the US, Britain, France, Jordan, the UAE, Oman and several African nations.

One conclusion resulting from the confidential disclosure is effectively summarized by Guardian: “The scale of the leak, coming 20 months after US whistleblower Edward Snowden handed over tens of thousands of NSA and GCHQ documents to the Guardian, highlights the increasing inability of intelligence agencies to keep their secrets secure.” Which is true, unless of course the leak itself was premeditated, but that’s entering some truly abstract conspiracy theory territory.

An interesting tangent is that while Netanyahu was desperate to start a war, he had done so without the express prior permission of the US, and if there is one thing the world’s Globocop demands above all else, is for all conflict pre-clearances to go through the Pentagon:

A few days before Netanyahu’s speech to the UN, the then US defence secretary, Leon Panetta, accused the Israeli prime minister of trying to force the US into a corner. “The fact is … presidents of the United States, prime ministers of Israel or any other country … don’t have, you know, a bunch of little red lines that determine their decisions,” he said. “What they have are facts that are presented to them about what a country is up to, and then they weigh what kind of action is needed in order to deal with that situation. I mean, that’s the real world. Red lines are kind of political arguments that are used to try to put people in a corner.”

Do “facts” involve blatant lies about a country’s weapons of mass destruction or YouTube clips “proving” without a shadow of a doubt that the paid actors, pardon, “casualties” of a Syrian chemical attack deserve an immediate and lethal US retaliation?

It would appear that, on the surface, Netanyahu’s days are numbered, because this latest “leak” of Mossad secret data, may well have had the NSA’s blessing.

As for the second conclusion, that the leaders of the “free world” are nothing more than the biggest propaganda liars conceivable well, that hardly needed yet another “leak” as proof. After all we now live in a world in which, thanks to the Brian Williams-es of the “mainstream media” and the now daily data leak refuting long-held “narratives”, conspiracy theory has become the last safe refuge for truth. 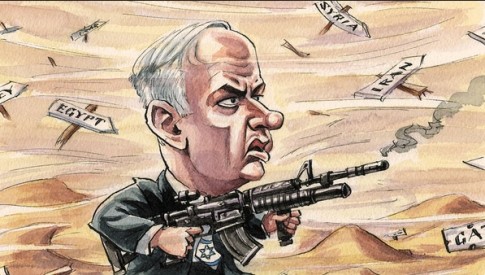