A paper published today in Science provides a case for increasing transparency and data collection to enable strategies for mitigating the effects of human-induced earthquakes caused by wastewater injection associated with oil and gas production in the United States.  The paper is the result of a series of workshops led by scientists at the U.S. Geological Survey in collaboration with the University of Colorado, Oklahoma Geological Survey and Lawrence Berkeley National Laboratory, suggests that it is possible to reduce the hazard of induced seismicity through management of injection activities.

Large areas of the United States that used to experience few or no earthquakes have, in recent years, experienced a remarkable increase in earthquake activity that has caused considerable public concern as well as damage to structures. This rise in seismic activity, especially in the central United States, is not the result of natural processes.

Instead, the increased seismicity is due to fluid injection associated with new technologies that enable the extraction of oil and gas from previously unproductive reservoirs. These modern extraction techniques result in large quantities of wastewater produced along with the oil and gas. The disposal of this wastewater by deep injection occasionally results in earthquakes that are large enough to be felt, and sometimes damaging. Deep injection of wastewater is the primary cause of the dramatic rise in detected earthquakes and the corresponding increase in seismic hazard in the central U.S.

“The science of induced earthquakes is ready for application, and a main goal of our study was to motivate more cooperation among the stakeholders — including the energy resources industry, government agencies, the earth science community, and the public at large — for the common purpose of reducing the consequences of earthquakes induced by fluid injection,” said coauthor Dr. William Ellsworth, a USGS geophysicist.

The USGS is currently collaborating with interested stakeholders to develop a hazard model for induced earthquakes in the U.S. that can be updated frequently in response to changing trends in energy production.

“In addition to determining the hazard from induced earthquakes, there are other questions that need to be answered in the course of coping with fluid-induced seismicity,” said lead author of the study, USGS geophysicist Dr. Art McGarr. “In contrast to natural earthquake hazard, over which humans have no control, the hazard from induced seismicity can be reduced. Improved seismic networks and public access to fluid injection data will allow us to detect induced earthquake problems at an early stage, when seismic events are typically very small, so as to avoid larger and potentially more damaging earthquakes later on.”

“It is important that all information of this sort be publicly accessible, because only in this way can it be used to provide the timely guidance needed to reduce the hazard and consequences of induced earthquakes,” said USGS hydrologist and co-author of the paper, Dr. Barbara Bekins.

But, as KFOR4 reports, Kim Hatfield, with the Oklahoma Independent Petroleum Association, says not so fast…

“I don’t think it’s particularly helpful because basically, it says we’ve come to a conclusion, but we don’t have the science to back it up,” Hatfield said. “Oklahoma has been very geologically active over time, and that’s one of the reasons we have so many oil and gas traps.”

While USGS calls for transparency in collecting data, Hatfield says that’s nothing new.

“You know, this is what we’ve been doing for the last year and a half. We were proactive in this. We were the ones who came forward and said ‘Listen, we want to work with the regulators, with the Geological Survey.’”

Matt Skinner, with the Corporation Commission, said, “This is more of a policy paper saying, you need to respond to it. You know, there has to be some kind of concerted effort.”

He says there are maps that show a growth in technology that has helped develop new guidelines.

“Even if you’re in an earthquake, according to the records we have, if you’re within three miles of a stressed fault, you’re only chance to put a disposal well there is to file for a yellow light permit,” Skinner said.

He says right now, there are about 80 applications that may not be approved.

Both sides of the issue say they’re looking to work together to find more answers. 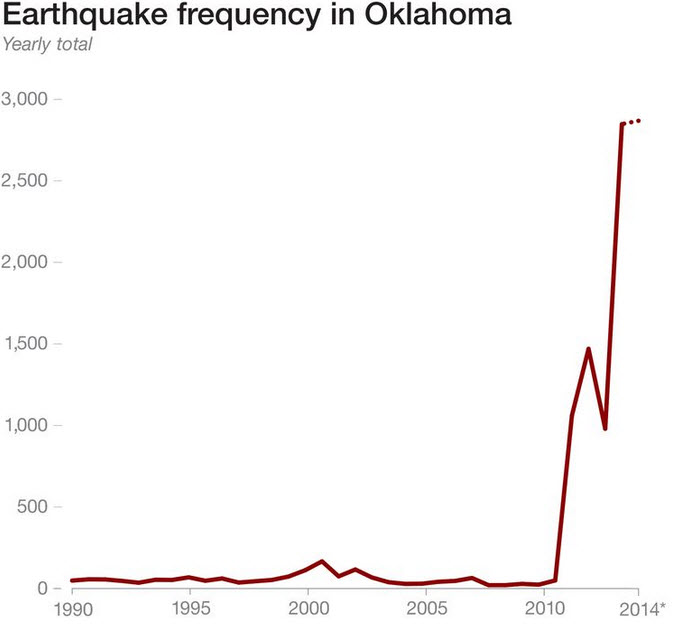 3 thoughts on “USGS Confirms Oklahoma Quakes Are Due To Fracking”