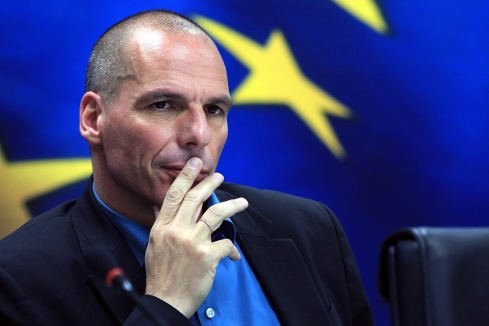 After days of repeated ultimata from The Eurogroup, as Germany (bad cop) and the rest (good cop) make optimistic sounds, this morning’s rejection of Greece’s latest plan (following Greek comparisons of Germany to Nazi surrender demands) has prompted something new:

Markets are stumbling on this news as Germany and the rest come to terms with not just the billions in debt on ECB and various bank balance sheets but the 49 billion other reasons to avoid Grexit that have mounted in TARGET2 liabilities.

Reuters adds that the Greece’s government “said it was up to euro zone finance ministers to decide whether to accept or reject its proposal to extend a loan agreement, in a bid to play down German comments rejecting the proposal as insufficient. “The Greek government submitted a letter to the Eurogroup asking for a six-month extension of the loan agreement. Tomorrow’s Eurogroup has only two options: either to accept or reject the Greek request,” a government  official said. “It will then be clear who wants to find a solution and who doesn’t.” Earlier on Thursday, the German finance ministry rejected Athens’ request for an extension by saying it fell short of the conditions set out earlier this week by the euro zone.

What else is at stake besides the tens of billions of Greek sovereign bonds held by the ECB and various European official institutions? Why just some EUR 49 billion in Bundesbank Target2 claims which risk a prompt unwind once the sanctity of the “monetary union” is finally broken… 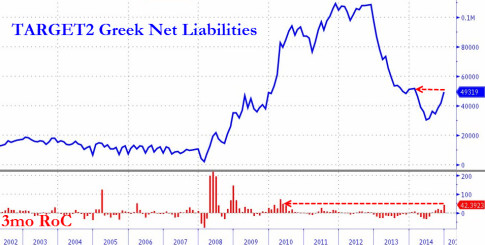 As Goldman recently warned, this is the worst case scenario…

That said, there are aspects that leave us more worried than we have been since the start of the Euro area crisis. The confrontation between Greece and its European creditors is taking place against different political constraints than on previous occasions. The new Greek government has to be able to claim at home that the program agreed on by its predecessors is all but defunct. While the European partners can agree to modify the content of the program, as we have seen occur in other program countries, they cannot abandon previous arrangements. In our view, the risk of a miscalculation in the negotiations remains high and will peak between now and month-end, when the current program ends.

To mitigate the risk of a failure of the two sides reaching an agreement by the end of the month, investors could consider buying deep out-of-money put options spanning this horizon on liquid equity indices. Given the systemic nature of the ‘shock’, we doubt that even the major markets would be unaffected.

And now, back to BTFATH.

2 thoughts on “Greece Gives Europe A Counter-Ultimatum: Accept Or Reject Our Offer”