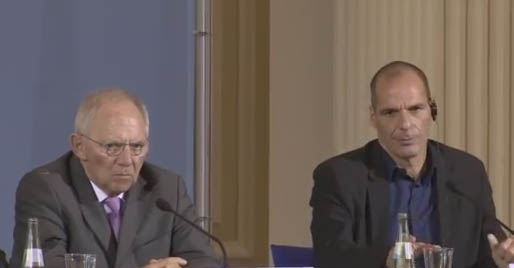 Update – it gets better:

Moments after we reported that stocks were delighted to price in yet another Greek resolution (even if they would be loath to reprice the reality), both Bloomberg and Reuters poured cold water over the HFT servers in Mahwah with the following headlines:

Germany rejected Greece’s request for an extension of its aid program, saying its offer doesn’t meet the euro region’s conditions for continuing aid.

The Greek government is trying to agree bridge-financing without meeting the conditions of its existing rescue program, German Finance Ministry Spokesman Martin Jaeger said in an e-mailed statement. European Commission Spokesman Margaritis Schinas moments earlier had said the Greek letter could be the basis for a “reasonable compromise.”

Euro-region finance ministers will make a “detailed assessment” of the request and formulate a response, Schinas said at a press conference in Brussels Thursday. Ministers are due to meet on Friday.

In other words this is precisely what we warned first thing today when we said that “as we first reported two days ago when redlining the original, Moscovici, and final Eurogroup draft proposal, what Greece is requesting is merely a return to the original, “agreed-upon” language formulation. The problem is that now that Europe officially threw up on that language, conceding to the Greek bailout proposal would effectively see the European Goliath bested by the Greek David, something which Germany’s Schauble will hardly agree to. ”

And sure enough, Germany did not.