“In any event, what all this means is that the Greek D-Day of February 28 will have to come much sooner, as Greece simply does not have the funds to last that long. The only question is whether the Syriza leadership will finally fold to Europe (most likely within the next 24-48 hours), or exit the Eurozone.” 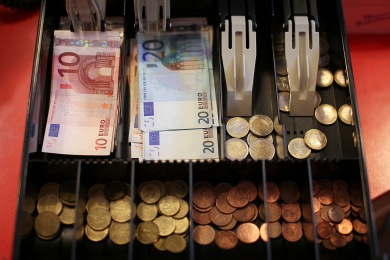 One month ago, we wrote that the biggest threat to Greece is not so much the disastrous situation facing the country’s banks – after all that is merely a domino that would bring down the bulk of Europe’s insolvent banks and as such the ECB would certainly step in to prevent a full out collapse, blustering rhetoric and posturing on either side notwithstanding – but the fact that Greece no longer appears able to collect tax revenues. As in even more than before.

Back then we cited Kathimerini which said that “budget revenues have slumped over the last few days as a result of the upcoming elections and taxpayers’ uncertainty about the future.”

The Finance Ministry has recorded a remarkable slowdown in applications for settlement of debts to the state through the 100-installment program, as well as a reduction in revenues from the single property tax (ENFIA), while the payment of arrears to social security funds appears to have stalled. Most taxpayers have chosen to delay their payments…  The dwindling state revenues will not only hamper the next government’s fiscal moves, but, given that the fiscal gap will expand, also negotiations with the country’s creditors.

Speaking to Kathimerini, a top ministry official confirmed the major slowdown in the rate of applications for debt settlement, and referred to post-election consequences from the shortfall in state revenues. The tax collection mechanism appears to be largely out of action while expired debts are swelling due to taxpayers’ wait-and-see tactics and the reduction in inspections.

Less than two months later, the worst case scenario for Greek state cash has materialized, and as Kathimerini reported overnight, Greece now has less than one week of cash left!

To wit: “February 24 is expected to be the first crucial day for state finances, as projections of cash flows see state coffers starting to run dry on that date.”

Of course, conceding that Greece is out of funds would also mean it is fully out of leverage and give the ECB all the bargaining chips ahead of today’s critical ELA decision, so Greek officials quickly tried to spin the reality: “Finance Ministry officials, however, assure they have identified resources they could tap if a small extension on Greece’s bailout obligations, up to the first week of March, is granted from the eurozone.”

The state of cash reserves – not robust before – has deteriorated further in recent days due to a shortfall in revenues, as a 1-billion-euro hole in January revenues is putting the execution of the state budget in jeopardy and hampering the management of cash reserves.

Given these figures, the Finance Ministry estimates that cash reserves will run out next Tuesday. It has the option, however, of using the reserves of general government entities kept in commercial banks in order to cover short-term needs next week. However, the problem that cannot be addressed as things stand concerns needs for the first week of March.

Unless something changes drastically to the country’s funding, Greece will not be able to fulfill all of its March obligations.

It would appear that among all the other things Samaras was lying about when touting the Grecovery in 2014, the Greek primary budget surplus was one of them: a surplus that only exists as long as the local population feels like paying its taxes. Which, nowadays, it does not.

In any event, what all this means is that the Greek D-Day of February 28 will have to come much sooner, as Greece simply does not have the funds to last that long. The only question is whether the Syriza leadership will finally fold to Europe (most likely within the next 24-48 hours), or exit the Eurozone.