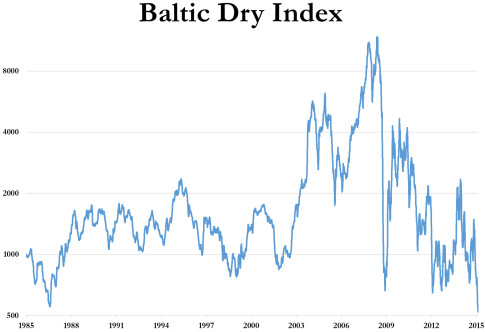 You know things are bad in the ship-building business when… amid considerably larger than expected losses, China’s COSCO announced that it has dis-assembled 8 vessels in January alone (including 3 bulk carriers) and will be decommissioning and disposing of them as it awaits a “more conducive” environment. It appears that is not coming anytime soon, as The Baltic Dry Index just hit 522 – a new all-time low (down a stunning 53 of the last 55 days).

As COSCO explains in its HKSE Statement:

The board of directors (the “Board”) of the Company wishes to inform the shareholders of the Company (the “Shareholders”) and potential investors that the Group had disassembled eight vessels (collectively, the “Vessels”), including five container vessels (Hutuo He, Xinhui He, Zhaoqing He, Yangjiang He and Yongding He) and three bulk carriers (Peng Jie, Peng Nian and Peng Cai) from 1 January 2015 to 31 January 2015.

The Vessels, with the aggregate capacity of 257,657 deadweight tons, were disposed of as scrapped vessels to different purchasers, all of which are independent third parties of the Company, at a total consideration of approximately RMB82.2 million. According to the unaudited financial results of the Company for the month ended 31 January 2015, realized losses incurred from the disassembly of the Vessels amounted to approximately RMB182.24 million.

As a result of the decommissioning of the Vessels, the average age of vessels owned by COSCON and COSCO Bulk has decreased, while the oil saving level and overall environmental friendliness of the vessels have improved. The Board considers that the decommissioning of the Vessels is conducive to enhancing the overall operational competitiveness of the shipping fleet of the Company and is in the interest of the Company and the Shareholders as a whole.

Remember what is key here is that The Baltic Dry Index – unlike so much of our modern world – is not financialized… in other words, it has not become bastardized by the daily needs of algo-high-freaks and central planners ability to provide margin-buffering liquidity to any and all positions… The Baltic Dry is ‘real’, it is the world economy’s “red pill” for want of a better analogy when all around we see the “blue pill” manipulated markets (and data) and the blissful ignorance of illusion.