Over the years we have had our fair share at the epic social(ist) experiment that is Venezuela. Below is a random selection of stories over the past years or two, which truly capture the essence of Venezuela’s socialist revolution: 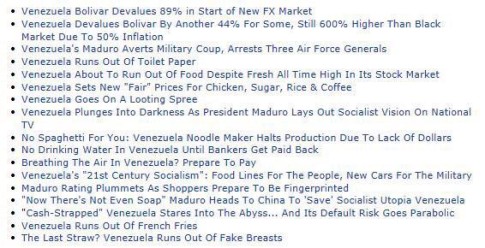 Unfortunately, the country whose president two weeks ago said that “Venezuela Must Deepen Socialism To Improve Economy“, which is the political equivalent of “we must do even more QE to fix record wealth inequality”, may have just hit rock bottom when Venezuelans, who already must line up for hours to buy the simplest of daily necessities (which they can obtain without being arrested in the process if they are lucky) now have to pay $755 for a pack of condoms.

“The country is so messed up that now we have to wait in line even to have sex,” lamented Jonatan Montilla, a 31-year-old advertising company art director. “This is a new low.”

And, as Bloomberg explains, while certainly farfetched at this point, one increasingly possible conclusion to the Latin American socialist utopia is a very tragic, and very terminal HIV epidemic, which puts what’s left of the nation back at square one.

Venezuela had the third-fastest rate of HIV infections per capita in South America, after Paraguay and Brazil in 2013, United Nations data shows. The country also has the highest rate of teenage pregnancies on the continent after Guyana, at 83 per 1,000, according to 2012 data from the World Bank. This compares to just 4 per 1,000 in Germany and 31 in the U.S.

“Without condoms we can’t do anything,” Jhonatan Rodriguez, general director at the not-for-profit health group StopVIH, said by phone Jan. 28 from Venezuela’s Margarita Island. “This shortage threatens all the prevention programs we have been working on across the country.”

The condom shortage, caused by a scarcity of dollars among importers, has prices on a website used to find scarce goods soaring and risks aggravating one of South America’s highest HIV infection and teenage pregnancy rates.

Condoms and other contraceptives disappeared from many Venezuelan pharmacies and clinics starting in late December, as the government tightened dollar disbursements amid sliding oil revenue, according to the Venezuelan Pharmaceutical Federation. No condoms were available in 10 eastern and central Caracas pharmacies visited in late January, compared with as many as 20 different kinds available at some locations in November, including Reckitt Benckiser Group plc’s Durex and Church & Dwight Co.’s Trojan brands.

The punchline, and the jarring outcome of ridiculous socialist policies is nothing short of capitalism on steroids:

On the auction website MercadoLibre, used by Venezuelans to obtain scarce goods, a 36-pack of Trojans sells for 4,760 bolivars ($755 at the official exchange rate), close to the country’s minimum monthly wage of 5,600 bolivars. At the unofficial black-market rate used by people with access to dollars, the cost is about $25, compared to $21 in the U.S.

The reason for the surge in prices: a halt in global trade, which means Durex imports to Venezuela have collapsed “because of the political situation the country is going through.” It appears that central banks can print everything, and trickle up wealth… everything but the actual lifeblood of a globzlied world: trade.

And the biggest irony is that none other than Maduro promised in 2013 to build a network of condom factories to protect Venezuela’s youth from the effects of “capitalist pornography.”

“When the ears grow hot and nothing can wait, and everything must happen now or the world will end — that’s when you end up with a tremendous belly at 14 or 15 years of age,” he said in a televised address in June 2013. “This can’t be.”

To get contraceptives in the capital, residents can still go to one of three family-planning centers run by IPPF subsidiary PlaFam, where in late January condoms were sold freely for 3 bolivars a piece.

“This is all there is,” said pharmacist Carlos Hernandez as he handed out the last two condoms available in the dispensary of the University Hospital of Caracas on Jan. 29. “Who knows when we will get more.”

Coming soon to every banana republic near you.