It had been a while since a member of the US state department had visited ground zero of its second most disastrous intervention in the past year (the first being the embarrassment that is ISIS) namely Kiev, Ukraine, the same place where precisely a year ago US assistant SecState Victoria Nuland was recorded in a hacked conversation saying to “Fuck the EU”, and revealed as the mastermind behind the violent Ukraine coup. Which is perhaps why today US Secretary of State John Kerry arrived in Kiev on Thursday “in a signal of firm US support for the country amid growing international alarm at a surge in fighting.”

In addition to whispering words of support to the local government, whose army has been on the defensive in past weeks in east Ukraine having lost several key outpusts, Kerry also unveiled $16 million in fresh US humanitarian aid.

And yet one can’t help but wonder if the true purpose of Kerry’s visit was something totally different, because just as the US Secretary of State was landing in Kiev, the Ukraine central bank finally conceded defeat and announced it will not only raise its key discount rate by 5.5 percentage points to 19.5% effective Friday, but effectively return to a float of the local, Hryvnia, currency. The central bank scrapped the hryvnia’s indicative rate and canceled daily currency auctions. Ukraine will retain some administrative measures, including mandatory sales of foreign revenue for exporters and restrictions on individual currency purchases, according to Governor Valeriya Gontareva.

The reason for the surprise move, which partially ends Ukraine effective capital controls resulting from the economic crisis which had included restricting individuals’ FX purchases and maintaining a requirement for exporters to convert their overseas revenue into hryvnia, is the collapse in central banks reserves. As Bloomberg reports, “the monetary authority also spent almost $1 billion of its foreign reserves to support the currency before October’s parliamentary election. As the government repays foreign debt and finances natural gas imports from Russia, reserves have sunk more than 76 percent since 2012 to $7.55 billion.” And with reserves so low they can only cover at most a few weeks of imports, the central bank had no choice but to follow in the steps of the SNB and permit the forces of market supply and demand take their toll.

Toll, which as the chart below shows, has sent the Hryvnia plunging by about 35% following the announcement, and in the process pushing local prices of imported (and soon all other goods), higher by the same amount. 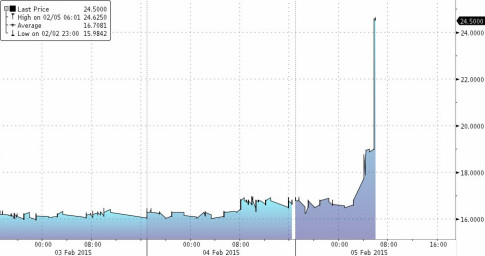 Not helping were comments by the local central bank head who said the “currency market is still dominated by a panic mood,” according to Governor Valeriya Gontareva who spoke to reporters in Kiev on Thursday, adding that Ukraine’s economy was torn by “multiple hryvnia rates.”

Well, now it will be torn by another bout of hyperinflation, which may well turn into all out economic collapse as the nation runs out of money unless the IMF bails it out: Ukraine hopes to conclude talks with the IMF within days over expanding its $17 billion bailout, Jaresko said Feb. 3. said.

Then again, the IMF may find it has its hands full with bailing out that other insolvent basket case, Greece, one which just so happens is actually a member of the European “Union.”

As for any further US help, and the reason why the central bank had to abdicate its duty, well Ukraine’s gold is long gone, so the western powers may have no further need to keep the financial stability in the country that is now a war-torn shell courtesy of its being the latest proxy pawn in the US global geopolitical chess game.