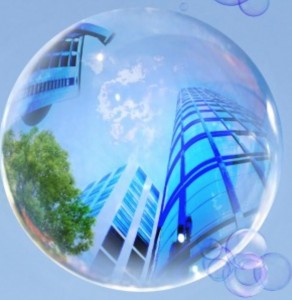 Rather than buying equity interests in buildings, TIAA-CREF and KTCU are seeking to invest in mortgages backed by office towers, retail properties, warehouses and apartments in major U.S. cities. The venture between the two companies, which manage teachers’ savings in their respective countries, is 51 percent owned by TIAA-CREF and 49 percent held by Seoul-based KTCU.

“You invest in a huge office tower in New York because you want a safe place to put your money and a decent return,” over the long-term, he said. “This is more a capital preservation play than it is a capital appreciation play.”

As soon as I woke up this morning, I saw an email from a very smart friend of mine in the finance industry. He forwarded me an article from the New York Post, about how TIAA-CREF had paid $3,158 per square foot for a building in the Meatpacking area of Manhattan (a record for the area), which isn’t far from where I lived for several years in the mid-2000s.

For those of you who aren’t aware, TIAA-CREF stands for Teachers Insurance and Annuity Association – College Retirement Equities Fund. According to the company’s own website, it:

We specialize in the distinctive needs of those who work in the academic, research, medical and cultural fields. We’re here to listen to you, to advise you, and to help you feel confident about making financial decisions.

So it essentially manages the investments of people who know the least about investing, i.e., muppets. As such, it came as no surprise that TIAA-CREF might serve as an important bag-holding vehicle for bubble assets just before a fall, tempted by juicy 4% yields. As my friend noted: “In other words, teachers and nurses are shattering property records to fund their retirement.”

Here are some excerpts from the article:

Our first thought on hearing the price for this sale was whether it was even a Samsung “remote” possibility. But yes, we’ve confirmed that TIAA-CREF is in contract to shatter a Meatpacking District sales record by paying $200 million for 837 Washington St.

The price for the newly constructed 63,131-square-foot boutique office and retail building works out to $3,158 per square foot, largely based on the value of the retail space and future upside in one of the world’s hottest neighborhoods.

For now, the buyer will have a “coupon to clip” as it rakes in just over 4 percent, based on Samsung’s rent for the 10-year deal which, similar to others, has two five-year renewals.

Reading this made me wonder whether it was just a one-off or part of a larger trend. It appears to be a larger trend, particularly between TIAA-CREF and South Korean companies. I came across an interesting Bloomberg article from late last year. Here are some excerpts:

(Bloomberg) — The Korean Teachers Credit Union and TIAA-CREF are staking a claim on Manhattan’s Socony-Mobil building in the first investment of a $1 billion joint venture.

Rather than buying equity interests in buildings, TIAA-CREF and KTCU are seeking to invest in mortgages backed by office towers, retail properties, warehouses and apartments in major U.S. cities. The venture between the two companies, which manage teachers’ savings in their respective countries, is 51 percent owned by TIAA-CREF and 49 percent held by Seoul-based KTCU.

“In the Korean investment environment, where interest rates remain low at about 2 percent, we believe this is a good opportunity to diversify the portfolio through investments in prime assets in the United States with strong fundamentals and steady income streams,” Sung-Seok Kang, head of global investments at KTCU, said in an e-mail. “We plan to expand this relationship further into other investment types.”

Mezzanine lending is a complex approach to property investment that not all foreign investors are comfortable with, said Ben Thypin, an analyst at New York-based Real Capital. Koreans typically prefer a direct ownership stake in a property because it gives them more control of the asset, he said.

Not to worry, TIAA-CREF is apparently doing that too.

Asian buyers have been a major force behind climbing real estate values in New York City. Bank of China plans to purchase 7 Bryant Park, a tower under construction by Hines, for about $600 million, a person with knowledge of the matter said this week. China’s Anbang Insurance Group in October agreed to buy the Waldorf Astoria, the 83-year-old Art Deco building occupying an entire block in midtown Manhattan. The $1.95 billion transaction is the largest ever for a U.S. hotel, according to research firm Lodging Econometrics.

“You invest in a huge office tower in New York because you want a safe place to put your money and a decent return,” over the long-term, he said. “This is more a capital preservation play than it is a capital appreciation play.”

Think about that logic. Manhattan office towers at record-breaking valuations several years into what is the greatest Central Bank created bubble in world history for oligarch type assets is considered a “capital preservation play” for teachers’ retirement money.

As of October, property sales in Manhattan were on pace to reach $63 billion this year, surpassing the record $62.2 billion from 2007, according to Massey Knakal Realty Services.

Debt investments like KTCU’s may be gaining appeal as funds seek alternatives to the meager returns being generated by owning top-tier real estate, according to Thypin.

Capitalization rates, a measure used to calculate yield on real estate investments, have been falling since 2010, according to Real Capital. The best buildings in Manhattan are yielding less than 4 percent, the lowest since at least 2002.

The venture between TIAA-CREF and KTCU is targeting investments in major metropolitan areas like New York and San Francisco that yield 5 percent to 7.5 percent, according to TIAA-CREF’s Amato.

The growth in property values in those areas is outpacing the recovery in the rest of the country. Prices in the biggest cities are about 13 percent above their 2007 peak, while buildings in small cities and towns are 10 percent below the prior highs, according to the Moody’s/RCA Commercial Property Price index.

This is a classic case of groupthink amongst asset managers. Everyone thinks these assets are safe and untouchable, so they are all piling into the same trade.

It appears clear that pension funds are being set up as the ultimate bag holders when the latest Central Bank bubble pops, and in the meantime, they are a perfect source of illegal fee gouging. A win-win for financial oligarchs.

For more on that topic, see:

Consultant the San Francisco Pension Fund Asked Whether it Should invest in Hedge Funds, Runs a Hedge Fund