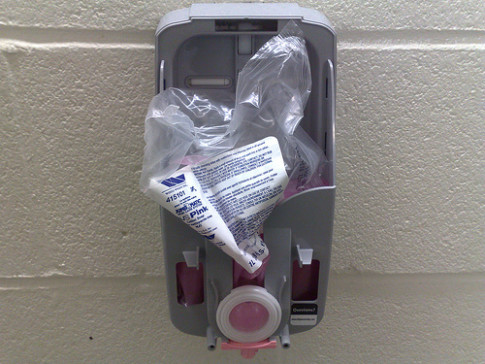 –  The New Greek Government Arrives In Its Residence: Finds No Power, No Wifi Password And No Toilet Soap (Zerohedge, Jan 28, 2015):

Things in Greece are bad. So bad, that the outgoing government of Antonis Samaras decided to not only leave the new inhabitants of the official residence of the Greek prime minister, the Maximos Mansion, without power, and without the WiFi password, but they decided to “borrow” all the soap in the toilet as well.

“We sit in the dark. We have no internet, no email, no way to communicate with each other”, said an employee of the Office, who has worked for various government for years. “That’s never happened before.” It shows that Samaras’ team have “no manners and no decency.”

Because of blackouts in the Maximos Mansion the official website of the Greek Prime Minister still shows the image and the resume of Samaras – even though since Monday, the left SYRIZA leader Alexis Tsipras is the head of government in Athens.

It was the first time that a government handover has been so bitter, said the office staff to SPIEGEL ONLINE. “Everything was seamless and worked under Mr Samaras but he would not let Mr Tsipras benefit.”

Samaras had already demonstrated in recent days that he is a bad loser. He was absent, as Tsipras arrived after his swearing-in of the Maximos Mansion on Monday. This Samaras broke with tradition: It is common for an outgoing Prime Minister his successor in office sitting welcomes you and wishes him success for the government’s work.

The environment of the ousted conservative Prime Minister pointed out that Samaras was not required according to Greek constitution to welcome his successor welcome.

But the lack of internet access should be the least of the problems for Tsipras and his team. Greek media report that Samaras’ employees have not even left the soap in the staff toilets.

Maybe we were wrong to mock Greek austerity after all.

1 thought on “The New Greek Government Arrives In Its Residence: Finds No Power, No Wifi Password And No Toilet Soap”