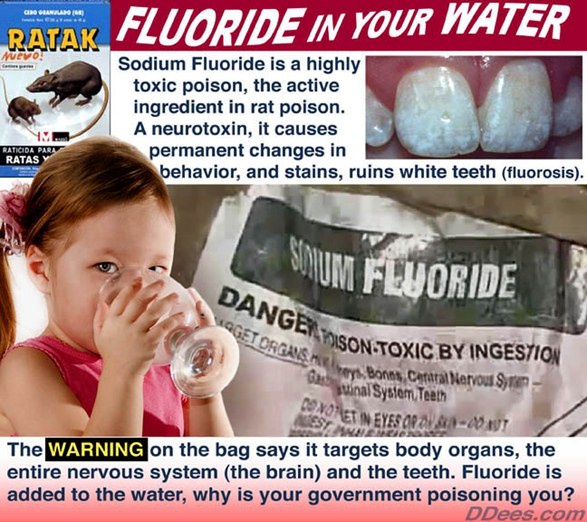 The sodium fluoride added to U.S. water supplies is contaminated with the toxic elements lead, tungsten and aluminum, a Natural News Forensic Food Labs investigation has revealed. Strontium and uranium were also found in substantial quantities in some samples, raising additional questions about the purity of industrial fluoride used for water fluoridation.

These ICP-MS results, shown below, were determined with the very same ICP-MS laboratory instrumentation used by the FDA and various universities. Mike Adams, director of the lab and one of the world’s leading researchers into heavy metals contamination of foods, conducted the research.

To conduct the research, Natural News acquired “pure” sodium fluoride from six chemical manufacturers in China who export fluoride for use in municipal water supplies and other industrial applications (such as pesticides).

Roughly 500 grams of white crystalline powder was acquired from each of the six companies in China.

Following digestion, the samples were normalized using laboratory-grade water (in an acid matrix), then dilution factors were calculated in the ICP-MS control software.

Samples were then run via ICP-MS, following strict quality control procedures including the use of acid blanks, mid-range calibration checks, NIST-traceable standards and verifying the conformity of calibration concentration curves.

As with everything tested at the Natural News Forensic Food Labs, all samples are held in storage for future validation.

We now have irrefutable scientific proof that the sodium fluoride used in U.S. water supplies is contaminated with toxic elements, heavy metals and other elements which have radioactive isotopes (strontium and uranium) that are present in the environment at trace levels.

The presence of these elements in water fluoridation chemicals cannot be refuted by any informed person, as the evidence is easily confirmed by any competent laboratory running ICP-MS instrumentation.

We also know that U.S. cities which foolishly engage in water fluoridation almost never test their raw materials for heavy metals contamination. After all, there is no law against dumping toxic heavy metals into public water supplies as long as the bags of powder are labeled “sodium fluoride.” While the EPA does require municipal water suppliers to test their water for overall heavy metals concentrations, in reality the samples acquired for this testing are often acquired upstream from the fluoride insertion point, thereby excluding the fluoride contaminants from the tests.

My laboratory testing shows that metals contamination varies considerably from one source of fluoride to the next. For example, while 988 ppb of lead was found in the sodium fluoride from one source, another source showed as little as 53 ppb. But that low-lead source contained over 1,400 ppb of uranium, a potentially concerning figure considering the amount of lingering radioactive uranium still found on the planet thanks to decades of atomic weapons testing. (The most abundant forms of uranium are non-radioactive, of course.)

The industrial heavy metal tungsten, which I have confirmed exists in imported rice protein products, was also found in two out of the six samples tested (33 1/3rd percent). This indicates a very high likelihood that people who are drinking fluoridated water from municipal water supplies may also be drinking tungsten (which has been linked to increased stroke risk at high concentrations).

Fluoride advocates have always used dishonest language to try to deceive the public about fluoride. I remember seeing an advertisement from a pro-fluoride city which claimed, “Fluoride is a naturally occurring mineral. Water fluoridation simply restores the natural level of that mineral in the water to protect public health.” Such a claim, we all know, is blatantly false in both its literal wording and its implied claim.

For starters, just because an element is “naturally occurring” does not make it healthy. Arsenic is also a naturally-occurring mineral in many water wells, but arsenic causes cancer and death. If the argument of fluoride proponents is that all “naturally-occurring minerals” should be “restored” to public water supplies, then by their logic we should also be dumping arsenic into the city water.

Secondly, sodium fluoride imported from China’s industrial chemical factories is not at all the same as a fluoride mineral found in groundwater. There are many different chemical compounds which contain fluorine elements in various configurations. Some are far more toxic than others, and all of them are, by default, labeled “fluoride” for purposes of municipal water fluoridation. This dishonest labeling is of course entirely intentional. 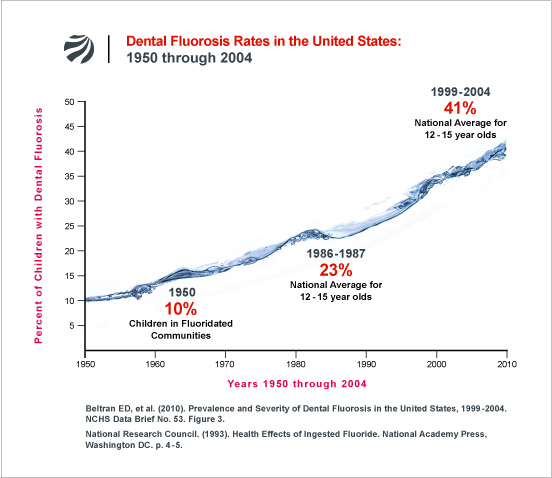 Thirdly, fluoride contamination of water wells around the globe is a very large and widespread problem. This is what gives rise to the epidemic of dental fluorosis, affecting tens of millions of children across the globe. Just because fluoride is found in some wells doesn’t mean it should be added to all other water supplies. The idea is ludicrous, and anyone who argues such an invalid point only admits they are irrational or unintelligent to begin with.

When they push “fluoride,” they don’t tell you about the toxic heavy metals you’re also drinking

The other dirty little secret of the fluoridation industry, we now know for certain, is that when fluoride proponents say children need to drink “fluoride,” they never mention the lead, tungsten, uranium, aluminum, strontium and other elements found in common fluoridation chemicals.

What is the public health impact of millions of children around the world drinking trace levels of lead with fluoride? It can’t be good: lead is well known to damage children’s IQs and impair learning. Even though the levels of lead in public water caused by contaminated fluoride are likely to be very small, they still contribute to other sources of lead exposure such as lead alloys in brass pipe fittings — which are still common in residential plumbing.

Here are several crucial questions for us all to consider: 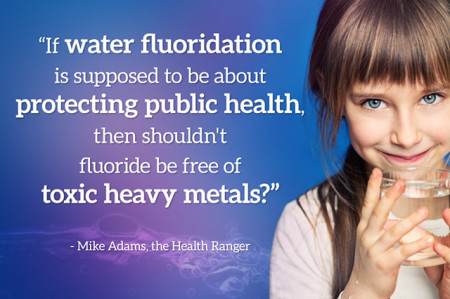 1) If water fluoridation is supposed to be about protecting public health, then shouldn’t fluoride be free from toxic heavy metals?

2) Why don’t cities which are engaged in water fluoridation test their raw materials for heavy metals and publicly share the results with residents?

3) Why isn’t there a national law requiring purity minimums for fluoride added to public water supplies?

4) If all the doctors and dentists who promote fluoride claim to be protecting public health, why have NONE of them ever tested fluoride for heavy metals contamination?

Don’t expect anyone from the mainstream media to answer any of these questions, however. They’re still pretending fluoride is good for you! 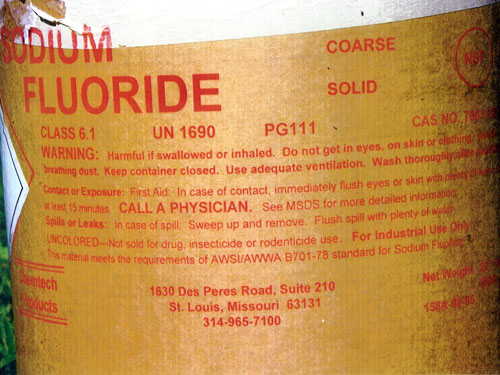