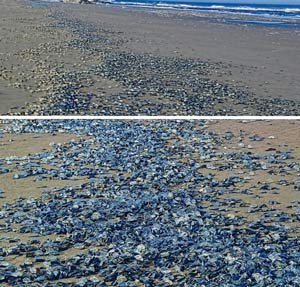 – TV: Mounds of millions of jellyfish-like creatures wash up on Pacific beaches across multiple states — “They lined entire Oregon Coast” — Seen for first time in a great many years — Official: “They just covered the sea surface… as far as we could see” — Thought to mix with ones from Japan (VIDEO & PICS) (ENENews, July 29, 2014):

CBS San Francisco, July 28, 2014: The sand was kind of blue because of these kind of disgusting little creatures, they look like jellyfish. We asked an expert, they’re not true jellyfish… Don’t be afraid of them… it is normal we are told. >> Full broadcast here

Tricia Johns’ Blog, July 18, 2014: Crescent City [California] — Around mid-morning we both noticed some small floating objects that weren’t familiar to us […] I suspected it was a kind of jellyfish […] Turns out these things are a jellyfish called Velella velella – we saw many thousands […]

KEZI, June 30, 2014: Millions of jellyfish-looking creatures have washed up along the shores… Officials say there’s nothing unusual about the visit from the Vellela Vallela… A surprise this weekend… Beach visitor: “All these little things, we’ve never seen them before.”…  It is best not to touch them, a lot of people have complained of an allergic reaction. >> Full broadcast here

Coos Bay World, July 10, 2014: Back after being scarce for nearly a decade, they’re showing up again this summer on Oregon’s beaches. […] Purple sailors, Velella velella, are small open-sea (pelagic) sea jelly. Great numbers of these have run aground these last couple of weeks. […] Velella on the western Pacific, near Japan, sport sails set at the opposite angle […] It is presumed — though not yet proven — that the two varieties mix in the center of the oceans […] 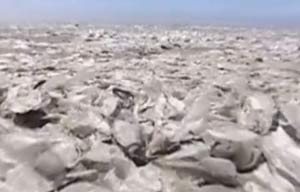 Siuslaw News, July 3, 2014: Beachgoers are advised to not touch the blue to purple-bodied creatures, which can cause allergic reactions for some people. […] “There are millions of them on the beach right now,” said [Trisha Wymore, Oregon Parks Dept.] Velella is typically an offshore creature that lives on the ocean surface.

KGW, July 9, 2014: Mounds of purple jellyfish like creatures lining the beaches […] This weekend they came by the millions. Beach visitor: “No, we’ve never seen anything like that. It’s, ah, not normal.” […] NOAA fisheries biologist Curtis Roegner was out on a research boat [from California to Astoria]. He said they lined the entire Oregon Coast. “We saw probably this population about 40 to 50 kilometers offshore and they just covered the sea surface. There were millions and millions of them as far as we could see. It was quite impressive.” Officials say ocean and wind conditions have to come together just right to cause such a massive beaching like this. >> Watch KGW’s broadcast here