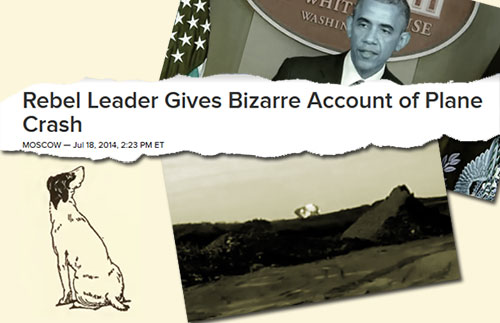 Sorry to be so grotesque, but there aren’t a lot of other ways to say it.

The Associated Press article floating around the mainstream media in source after source (surely before it gets buried forever) is simply titled, “Rebel Leader Gives Bizarre Account of Plane Crash”.

A top pro-Russia rebel commander in eastern Ukraine has given a bizarre version of events surrounding the Malaysian jetliner crash — suggesting many of the victims may have died days before the plane took off.

The pro-rebel website Russkaya Vesna on Friday quoted Igor Girkin as saying he was told by people at the crash site that “a significant number of the bodies weren’t fresh,” adding thathe was told they were drained of blood and reeked of decomposition. [emphasis added]

Of course, the commander will be immediately discredited by western-backed establishment media sources simply because of which side of this conflict he politically stands on.

Not the point, however.

Bodies drained of blood and reeking of decomposition at a fresh crash site?

Who would even think to make something like that up in the first place?

This story is only bizarre until you consider the fact that this situation might be staged.

That explanation might help explain what’s going on in this video below, supposedly taken of the crash site moments after the plane went down, where a man scatters a handful of what look like brand new, unscathed passports from the Netherlands on the ground.

Again…are they wagging the dog to get us in to wider war?

Sure, President Obama seemed all properly concerned today when he mentioned at a press conference that an American was indeed killed on board MH17 and basically advanced the narrative that “Russia did it”.

He wasn’t all that concerned yesterday — right after the crash happened — when the media thought perhaps 23 Americans had been killed, however…at least not enough to cancel his burger photo op.