In a report published today called “Risky Business,” commissioned by some of America’s top business leaders to put price tags on climate threats. For example, by the end of the century, between $238 billion and $507 billion of existing coastal property in the U.S. will likely be subsumed by rising seas, and crop yields in some breadbasket states may decline as much 70 percent.

But perhaps the biggest way Americans will physically experience global warming is, well, the warming. By 2050, the average American is likely to see between two and more than three times as many 95 degree days as we’re used to. By the end of this century, Americans will experience, on average, as many as 96 days of such extreme heat each year.

The report breaks down “extremely hot” days by region to show what a child born in the past 20 years can expect to see over a lifetime. 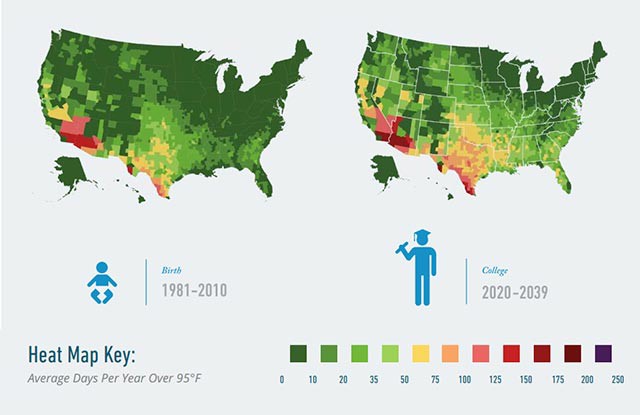 The rising heat will strain the U.S. energy system,

As time goes on, the situation worsens. 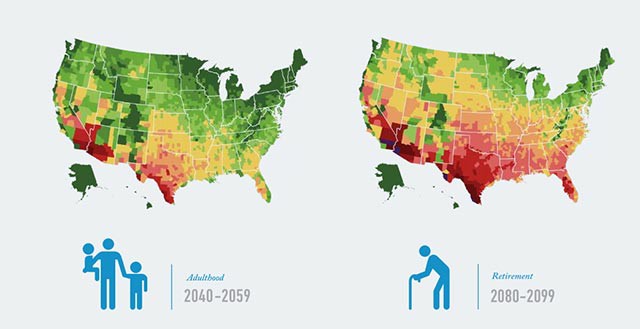 By the end of the century, the Southeast will see an additional 11,000 to 36,000 people die each year from heat-related conditions as the region swelters under as many as 130 more days of extreme heat, according to the report.

If humans continue to pollute greenhouse gases on the current trajectory, the average Midwesterner could see an HHSI of 95 degrees two days every year by the end of this century. By the end of next century it will be impossible to remain outdoors without a cooling system for 20 days a year.

“The risks are much more perverse and cruel than we saw with the financial crisis, because they accumulate over time…a business-as-usual approach is actually radical risk-taking.”

And in case you were wondering who would create such scaremongery (rightly or wrongly) and Mutaully Assured Destructive words?

Today’s report was funded by