A little over a month ago, when Russia announced the much anticipated “Holy Grail” energy deal with China, some were disappointed that despite this symbolic agreement meant to break the petrodollar’s stranglehold on the rest of the world, neither Russia nor China announced payment terms to be in anything but dollars. In doing so they admitted that while both nations are eager to move away from a US Dollar reserve currency, neither is yet able to provide an alternative. This changed rather dramatically overnight when in a little noticed statement, Gazprom’s CFO Andrey Kruglov uttered the magic words (via Bloomberg):

In other words just as the US may or may not be preparing to export crude – a step which would weaken the dollar’s reserve status as traditional US oil trading partners will need to find other import customers who pay in non-USD currencies – the world’s two other superpowers are preparing to respond. And once the bilateral trade in Rubles or Renminbi is established, the rest of the energy world will piggyback.

But wait, there’s more. Because only now does Gazprom appear to be unveiling all those “tangents” that were expected to hit the tape in May. Among Kruglov’s other revelations were that Gazprom is in talks on a Hong Kong listing and is weighing the issuance of Yuan bonds. Gazprom is also considering selling bonds in Singapore dollars, the CFO said at briefing in Moscow. Wait, you mean that by alienating and embargoing Russia from western (USD, EUR-denominated) funding markets, it has pushed the country to turn to its pivoting partner, China and thus further cementing the framework for the next Eurasian strategic alliance?

In other words, central bankers of China and Russia discussed how to replace the dollar with Rubles and Yuan. From the PBOC: 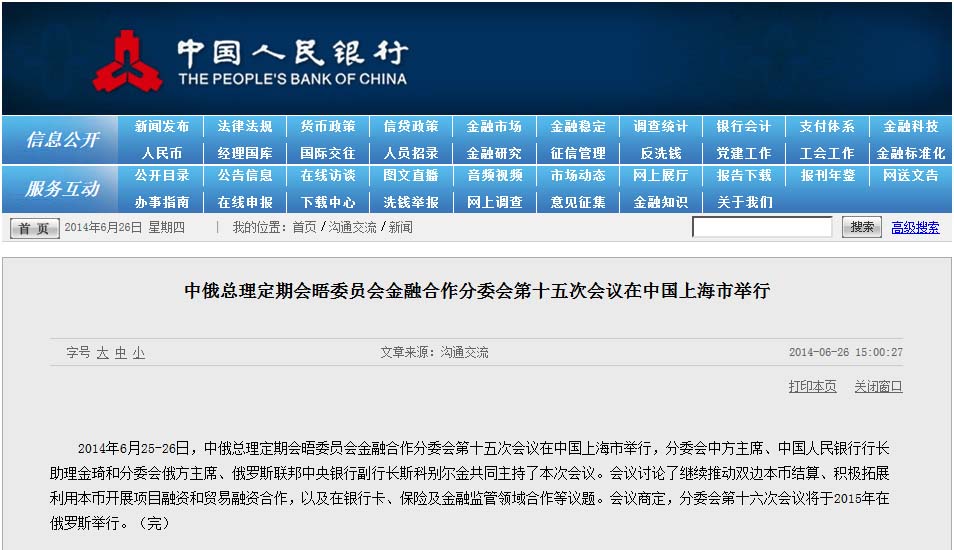 In retrospect it will be very fitting that the crowning legacy of Obama’s disastrous reign, both domestically and certainly internationally, will be to force the world’s key ascendent superpowers (we certainly don’t envision broke, insolvent Europe among them) to drop the Petrodollar and end the reserve status of the US currency.