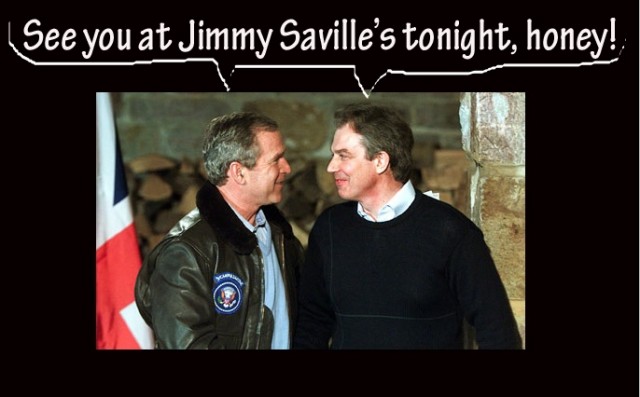 Today, after more than a million dead and several millions exiled, as the “too extreme for al-Qaeda” ISIL is grabbing more and more of Iraq, the question once again arises:

Why did George Bush and Tony Blair drag us into the Iraq quagmire?

They told us it was about Saddam’s WMD. But that was a preposterous lie. Bush even camped it up about looking for WMD under his desk. He thought it was fabulously hilarious that anyone had ever believed in Iraqi WMD.

So what was the real reason for the Iraq war?

Some say oil. But that seems dubious, since big oil lobbied hard against the Iraq invasion, fearing it would destabilize their business.

Others say Israel. That makes more sense; the Zionist lobby was the main force pushing for war in Iraq. But how can a sh*tty little country like Israel force a superpower to do its bidding?

One way is by blackmailing politicians. And in Bush and Blair, they had plenty of opportunity.

“It relates to George W. Bush’s homosexual relationship, since about puberty, with Victor Ashe, long-time Mayor of Knoxvillle. When some in Congress began inquiries in the fall of 2003, Ashe in December, 2003, gave up being Knoxville Mayor and was appointed by George W. Bush, the occupant and resident of the White House, as the U.S. Ambassador to Poland.”

Another story about Bush Jr. is that his dad invaded Panama because Noriega was trying to blackmail the Bush family into giving him a bigger cut of the CIA’s cocaine profits. Apparently Noriega was in possession of photos of W.  taken at a Caribbean brothel that caters to pedophiles. This is not just a rumor; I have heard it verified by a well-placed intelligence community source.

There is good reason for the embarrassment of the Pentagon in the (Abu Ghraib) affair. The orders to take the sexually-oriented photos and videos, some of which involve teenage Iraqi boys and girls and sodomization by their guards, came directly from a pedophile and closeted male homosexual ring operating in the White House, according to the intelligence sources. Copies of the tapes and photos were sent directly to the White House for the entertainment of senior members of the Bush White House, including officials in the Vice President’s office and the Executive Office of the President.

None of this is surprising to anyone who follows the seamy underbelly of American politics. The Bush family is notorious for its sexual degeneracy. For example, George H.W. Bush attended parties serviced by child prostitutes, according to sworn testimony from the children themselves. For details read The Franklin Scandal and The Franklin Cover-Up and check out the video Conspiracy of Silence.

And the Mossad is very good at getting hold of blackmail material. During J. Edgar Hoover’s tenure at the FBI, Hoover had pornographic blackmail photos of just about everybody who mattered – which made Hoover the USA’s unelected dictator. But the real ruler, the éminence grise behind Hoover, was Mossadnik crime kingpin Meyer Lansky. It seems likely that Lansky’s heirs in Tel Aviv have an extensive collection of child pornography featuring “adult actor” George W. Bush.

And as for Tony Blair, he too appears to be a blackmailed pedophile.

Despite the strict libel laws in the UK, a British researcher has reported some, shall we say, “ugly rumours”:

‘In the autumn of 1983, a young well-dressed man presented himself to Bow St Magistrates’ Court on a morals charge. He was given a conditional discharge and bound over to keep the peace. The young man gave his name as Charles Lynton. He is now among the highest in the land.’

Blair’s middle names are Charles and Lynton. I have asked for the records of the period (the Court no longer exists) but failed to trace any mention there of the ‘case’ – if indeed it ever existed. Although I found the general attitude of information suppliers to be obstructive, there wasn’t any strong feeling of hiding stuff; frankly, I’d be amazed anyway if something incriminating about Tony Blair hadn’t been removed by now. Another source wrote to us as follows:

‘He was caught importuning in a Westminster toilet. It was all covered up.’

Two things are, however, relevant. Gossip did abound about Blair’s sexuality during his time in the rock band Ugly Rumours at Oxford. And while nobody has ever stood them up, it is widely accepted that Derry Irvine (Blair’s boss in Chambers) regularly referred to him as “the star closest to Uranus”.

While the Bush White House was jerking off to live feeds of Abu Ghrayb torture, Tony Blair’s government was cavorting with child prostitutes:

Perhaps Blair never grew out of his fondness for liasons in public toilets – even while serving as Prime Minister. Blair’s government was embarrassed when an investigation found traces of cocaine in Parliament’s public toilets, while other investigations showed that Blair’s crowd was neck-deep in satanic ritual child abuse.

In early 2003, the “Operation Ore” investigation was about to reveal Blair and his cronies as serial child abusers.  Then Blair issued a gag order imposing a 100 year blackout on all discussion of the subject. Articles with titles like “Tony Blair Caught Protecting Elite Pedophile Ring” got yanked from circulation.

What were Bush and Blair doing when they locked themselves behind closed doors to supposedly plot the Iraq war? Investigative journalist Bob Kearley says that “a lot of squaddies I’ve met think there’s something weird going on between Bush and Blair. If you’re then told that the executive responsible for the conduct of the war is staffed by child-molesters … well, then Saddam suddenly looks like the sort of bloke with whom you can share a few tins [beer].”

If you don’t think there was anything going on between Bush and Blair, scroll back to the top of this article and look at that Bush-Blair photo again. If it doesn’t set off your gay-dar, nothing will.

And if all of this sexual blackmail isn’t bad enough, it turns out that the Zionists had an even nastier card up their sleeves: 20 nuclear weapons planted in American cities, ready to go off in a fake “al-Qaeda” attack if Bush refused orders to invade Iraq. Gordon Duff revealed some of the sordid details about this nuclear blackmail on my radio show last Friday.

So it seems that 9/11 was the warning shot of a coup d’état designed to force the US to fight Israel’s “Clean Break” wars and destroy its enemies – the famous “seven countries in five years” mentioned by Gen. Wesley Clark. And blackmail, both sexual and nuclear, may have played a role.