While one should take locally sourced news on the volatile situation in Ukraine, reported by media that is ideologically close to the source, with a grain of salt, Russian press agency RIA has generally had a good track record in reporting news regarding the Ukraine civil war. In which case if the following report of what may have happened overnight during the latest escalation of fighting in the eastern Ukraine city of Slavyansk, and which certainly doesn’t paint the Ukraine army in a favorable light, is even partially correct one can see why suddenly western media news coverage of the civil war in Ukraine has become somewhat sparse.

According to RIA, quoting Slaviansk people’s mayor Vyacheslav Ponomaryov, about 1,200 Ukrainian army soldiers have been killed during a special operation in Slaviansk, and eight helicopters and 15 armored vehicles were destroyed. Supposedly this includes the 1 helicopter whose crash was reported previously. 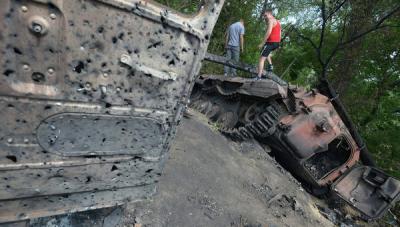 “According to our information, the Ukrainian army has the following losses and damages: 1,200-1,300 people were killed, eight helicopters, 15 armored transport vehicles, and three [artillery] weapons destroyed. They are suffering huge losses. I’m speaking only about Slaviansk,” Ponomaryov said in an interview with the Latvian radio station Baltkom.

Acting President Oleksandr Turchynov confirmed Thursday the downing of a military helicopter had killed 14 Ukrainian servicemen, including a general. Soon after that, the Ukrainian National Guard clarified that 12, not 14 people were killed in the Mi-8 helicopter crash near Slaviansk.

The people’s mayor also noted that the self-defense forces of Slaviansk had lost about 200 people.

“About 200 were killed and 300 wounded,” Ponomaryov specified.

Meanwhile, as the media curtain descends, the fighting on the ground is escalating:

The troops involved in the military operation in southeastern Ukraine began firing mortars at Slaviansk Tuesday at around noon local time. Several private homes were razed, including houses in the villages of Andreevka and Sergeevka in the city’s suburbs. Several dozen people were killed.

Alexei Pushkov, the head of the Russian Duma’s Committee on Foreign Affairs, wrote Wednesday that the Kiev interim authorities are lying when they claim the residential areas in eastern Ukraine are not being targeted by troops.

Perhaps the best indicator of how accurate this report is will come from the Kremlin itself: if indeed the fighting is as extensive as reported, Russia’s previous suggestion for humanitarian intervention will morph from a polite offer to a stern warning about what the Russians will do, if not outright border-crossing action.