Hedge fund performance continues to be weak so far in 2014 and this week was no different as long/short funds found to their dismay that trading on rational thought and fundamental analysis was for losers. However, global macro strategies are doing the worst of all as carry trades unwind, sanctions create inflows, and geopolitical chaos creates nonsense from sense. The best performing hedge fund strategy… buying-the-most-shorted is beaten only by Bonds.. and in first place of all assets – Gold. 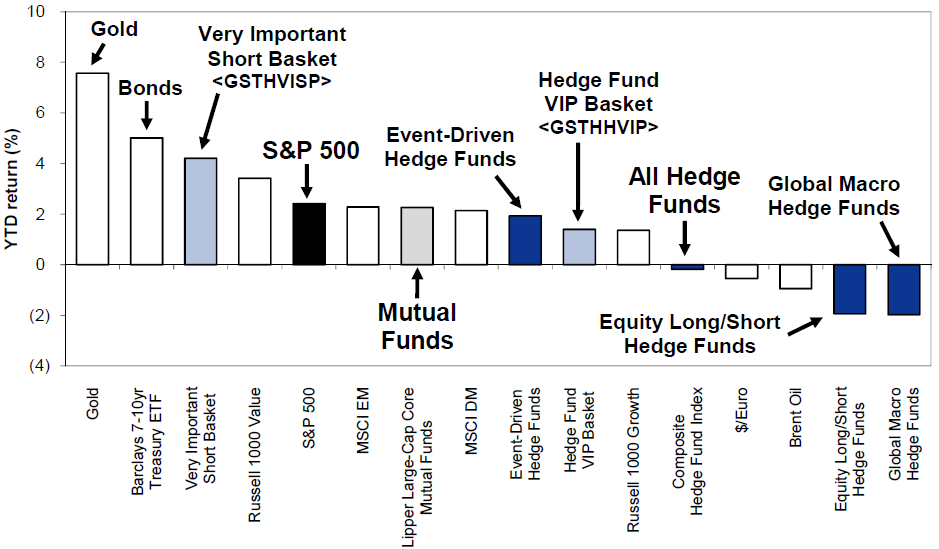 Our Hedge Fund VIP basket of most popular hedge fund long positions has returned just +1.4% YTD vs. +2.4% for the S&P 500. At the same time, our basket of Very Important Short Positions (GSTHVISP) has returned +4.2% YTD.

The long VIP/short VISP pair, a proxy for equity hedge fund performance, has a net return of -2.8%, in line with the -2% YTD return of the HFR Equity Long/Short Hedge Fund Index.

Fund performance suffered during the March-April drawdown in popular momentum and high-growth stocks. The Hedge Fund VIP basket experienced a sharp 5% pullback relative to the S&P 500 in late March, suffering its worst 21-day return outside of the crisis periods of 2002, 2008, and 2011.

Performance headwinds from stock-picking were compounded by poor market timing. The majority of the most popular positions have actually performed well YTD. The basket’s internet and media stocks returned -4% YTD, while the balance of the constituents rose 6%, outpacing the S&P 500 by nearly 400 bp. However, hedge funds cut net exposure in early April, just before the S&P 500 and most popular positions began to rebound.

Funds were remarkably quick to act during the momentum drawdown. The most recent 13-F filings show holdings as of March 31, just two weeks after the drawdown began, but reflect significant changes in portfolio composition compared with the prior quarter: Position turnover, which had fallen for three consecutive quarters to record low levels, rose modestly; the average fund reduced its long holdings in the Info Tech sector, moving underweight relative to the Russell 3000; and funds increased ETF shorts while lowering ETF longs to the smallest portfolio weight since 2007

Poor hedge fund performance is generally unsurprising given the obstacle of historically low return dispersion. Hedge funds consistently allocate the largest share of their assets to the Consumer Discretionary sector, where the large dispersion of stock returns typically provides alpha opportunity for stock-pickers, and as of March 31 nearly one in four dollars was put to work in the sector.

Recently, however, return dispersion has fallen to historic lows for the S&P 500 in aggregate (1st percentile vs. its 30-year history) and especially for the Consumer Discretionary sector. In addition, after outperforming the S&P 500 by an average of 11 percentage points in each of the past five years, Consumer Discretionary is currently the worst-performing S&P 500 sector YTD. Conversely, the best-performing sector in 2014, and one of the only two sectors with above-average return dispersion, is Utilities, where funds have a 0% net weighting.