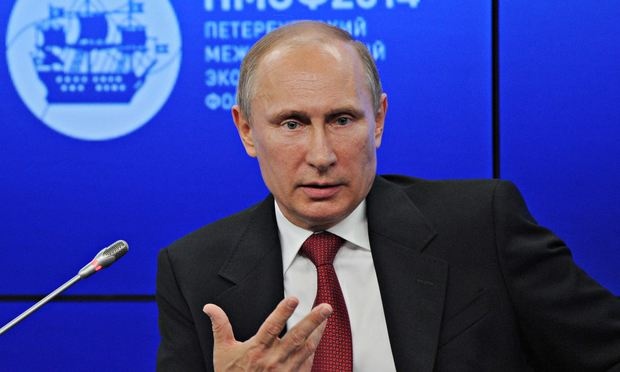 Russian president says he will honor outcome of weekend elections, but that dialogue must replace military operations and violence

Ahead of contentious nationwide elections in Ukraine this weekend designed to pave the way for a new government in the politically fractured country, Russian President Vladimir Putin on Friday had strong words for western nations, including the United States, who he says backed the coup d’etat that has put the nation on the edge of all out civil war.

In his remarks Friday, Putin said that Russia would back the results of the vote, but cautioned the Obama administration on its continued mishandling of the crisis, including its failure to honor diplomatic efforts and an overtly-biased relationship with the individuals and parties in Kiev who overthrew the elected government of President Viktor Yanukovich earlier this year.

In an interview with CNBC, in front of an audience at the International Economic Forum in St. Petersburg, Putin offered his overview of what happened in Ukraine and the current conditions by stating (based on CNBC’s transcript):

What happened in Ukraine now is chaos, the country is sliding into chaos. Yanukovych agreed to do anything, whatever, had it all been done legally, we’d continue subsidising them, we’d keep gas prices low, we’d allocate the 15 billion we’d promised. Let us be frank, we’re all grownups in the room, we’re all smart and educated people. The West supported anti-constitutional coup d’état, not just by giving away cookies, but by giving political support, support in the media, using all sorts of tools. And are you blaming us? What we suggested was dialogue. We were denied. When I last came to Brussels we agreed that dialogue would continue but that was before the coup d’état.

Asked repeatedly by the interviewer to discuss how Russian president intends to work with the new government in Kiev, even if the outcome is unfavorable to many in the east and the south, Putin indicated that though he would like to see reforms that address the concerns of all Ukrainians, he is committed to a renewed and healthy relationship with Russia’s neighbor. Putin stated:

Like I said, and I’m not kidding and I’m not being ironic, what we want for Ukraine is peace and calm. We want this country to recover from crisis and conditions are to be created for that. … Again not being ironic,  [Ukraine] is a sister nation and we want it to enjoy peace, order and we already cooperate with people that are in power and after the election of course we will cooperate with the newly-elected head of state. But just to make it clear I hope that after the election all military action will stop and national dialogue will begin.

Tensions in the nation are again ascendent as new violence was reported in the east of the country on both Thursay and Friday.

As the Guardian reports:

Ukraine’s defense ministry [said on Friday that] up to 500 insurgents attacked government troops in one clash in eastern Ukraine that left 20 insurgents dead. The ministry said in a statement the clash took place on Thursday as a convoy of Ukrainian troops was attacked outside the eastern village of Rubizhne. Up to 16 Ukrainian soldiers also died on Thursday in an assault on a checkpoint by separatists.

On Friday, the Donbass paramilitary group, which operates with the tacit backing of Kiev, said it had been ambushed by separatist forces, with at least one dead, and many injured or taken hostage.

Voting in the east will be severely limited on Sunday, with pro-Kiev forces not fully in control of the region and a fear that violence could spike as the separatists attempt to disrupt the vote. Kiev has said it will halt its “anti-terrorism operation” against separatist forces on voting day.

1 thought on “Putin: US Backed the ‘Coup’ That Now Threatens Civil War in Ukraine”