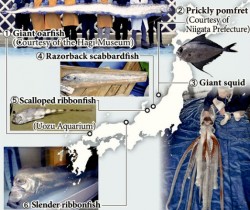 Nome Nugget, Mar. 27, 2014: Radiation sampling to happen for Bering Strait — Regional concerns about the possibility that Bering Sea waters could be radioactively contaminated […] “People throughout our region have repeatedly asked for testing of our subsistence foods and water,” said [University of Alaska, Fairbanks professor Gay Sheffield]. “Seals fell sick with a still unknown disease, we’ve had the documented first cases of avian cholera in Alaska, we’ve had unusual animals like the beaked whale showing up dead on the beach near Gambell and each time people throughout the region expressed concerns about the effects of Fukushima either in the air, and now with the approaching plume in the water,” said Sheffield. […] Gambell Tribal President Eddie Ungott agreed and said that his village is very concerned about radiation. […] IRA President Paul Rookok, Sr. said they are worried about the health of marine mammals […]

Nome Nugget, Apr. 17, 2014: Sheffield also noted that a rare whale washed ashore near Gambell […] a species that has never been seen this far north.

Yomiuri Shimbun, May 9, 2014: Denizens of the deep surface in mysterious profusion […] Giant oarfish over four meters in length and giant squid with massive tentacles… Deep-sea creatures whose biology is still cloaked in mystery have been found one after another along the coast of the Japan Sea since the beginning of the year. Experts believe that a change in sea temperature has had some kind of effect, but the cause remains unknown. “It was weak but still alive. It spewed water as if exhaling heavily,” Yuji Kawaguchi, 65, a fisherman in Sado, Niigata […] eight giant squids have been found in waters off Niigata […] 11 giant squids have been identified over the five decades until last year and this year has been exceptional.