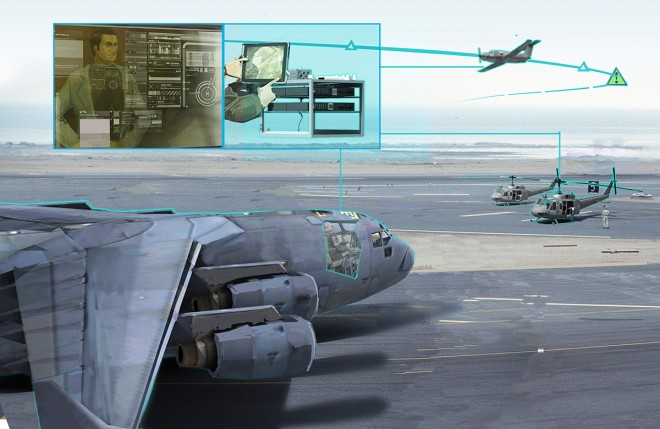 Some think that the Defense Department couldn’t possibly reduce its forces as much as it claims it will. After all, who would fly the planes?

Now DARPA has an answer. The Pentagon’s research arm is developing a sophisticated, drop-in autopilot that can replace as many as five crew members of a military aircraft, and turn the pilot into a high-level “mission supervisor” issuing commands through a touch screen.

The Aircrew Labor In-Cockpit Automation System (ALIAS) program is a tailorable, removable kit that will assist in all phases of aircraft flight — even dealing with emergency system failures in-flight. The  agency says the system will reduce pilot workload, augment mission performance and improve aircraft safety.

“Our goal is to design and develop a full-time automated assistant that could be rapidly adapted to help operate diverse aircraft through an easy-to-use operator interface,” said Daniel Patt, DARPA program manager, in a statement. “These capabilities could help transform the role of pilot from a systems operator to a mission supervisor directing intermeshed, trusted, reliable systems at a high level.”

DARPA says it plans to build on the advances in autopilot technology over the past 50 years and develop a highly adaptable automated system that can move from aircraft to aircraft and execute missions from takeoff to landing — all from a simple touch and voice recognition interface.

Allowing ALIAS to handle lower-level flight maintenance tasks would free human operators to focus on mission-level tasks, according to DARPA.

In outlining the Pentagon’s budget in February, Secretary of Defense Chuck Hagel expressed his intent to shrink the department’s budget to pre-World War II levels by reducing personnel and expensive equipment costs in preference for cost-saving technology.

“We are repositioning to focus on the strategic challenges and opportunities that will define our future; new technologies, new centers of power, and a world that is growing more volatile, more unpredictable, and in some instances more threatening to the United States,” said Hagel.