The comedy from yesterday continues. Sure enough it is market open on a Tuesday (remember – the market never goes down on Tuesday) – the two most bullish catalyst to momentum ignition vacuum tubes. The rest is indescriminate panic buying history. 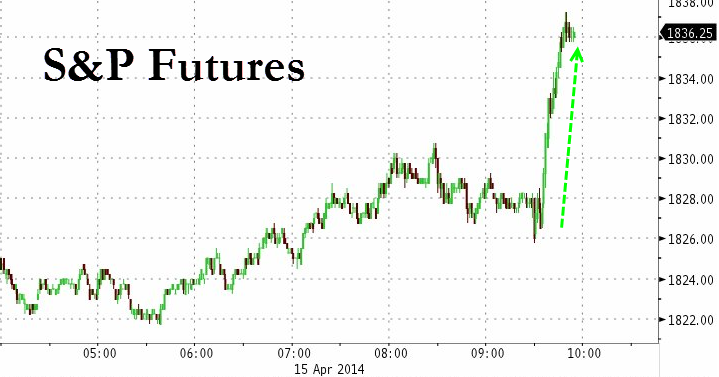 Consumer confidence slumps in the core and Ukraine fears weighed heavily on European stocks despite getting a push from the insanity in US equity markets this morning. Europe closed at their lows of the day led by Italy and Portugal stocks fading fast. It would appear that these worried investors greatly rotated into safe-havens such as Italian government bonds – which broke to their lowest yield on record today… makes sense right?

For the first time since Novemeber 2012 (when QE4EVA was kicked off in style), the Russell 2000 – that long-heralded indication that everything is great in the US economy and the indicator that stocks are great at discounting the future that is undoubtedly rosy – has broken back below its 200-day moving-average. In the meantime, an oddly dominant algorithm is swamping options markets with millions of fake orders…”rigged?”

It is perhaps worth reflecting on the smorgasbord of free advice given out by the talking-heads after last night’s closing ramp proclaiming the dip to be bought and that everything was fixed once again. It was not. Stocks are making fresh cycle lows and the Nasdaq and Russell 2000 are both now below the 200-day moving-average and appraoching the 10% (correction) from their highs. 10Y is back under 2.6% and the 30Y yield is back at 10-month lows… which perhaps explains why “growth” stocks are back at 7-month lows versus “value” stocks…

Gold prices are down almost 2% this morning (over $25) as last night’s slowdown in Chinese money-supply growth and fears that China’s insatiable gold demand has become less insatiable send the barbarous relic back towards $1300. Slowing GDP expectations, increasing restrictions on shadow-banking commodity-backed financing, and a need for liquidity are all factors weighing on the precious metal this morning.

The fears over ongoing commodity-financing restrictions and slowing money supply growth are contagiously spilling over into other collateral. Copper prices are in free fall this morning, crashing through critical levels (especially Dennis Gartman’s “long punt”) and back below the Maginot Line of $3.00. These are near 3-week low levels and the biggest drop since the cash-for-commodity financing deals came under real pressure.

“Yesterday, these stocks were darlings. They are so desperate, they are telling lies to steal pennies……”

And the ECBs buying spree continous…..

In summary: someone, unclear who, operating through Belgium and most likely the Euroclear service (possible but unconfirmed), has added a record $141 billion in Treasurys since December, or the month in which Bernanke announced the start of the Taper, bringing the host’s total to an unprecedented $341 billion!