Obviously, these helicopters could pose a substantial obstacle to say, a tyrant drunk on his own power, with an army at his disposal.”

Couple that with the as yet, unexplained, massive arms buildup by the Department of Homeland Security, and the National Defense Authorization Act which allows the feds to arrest and detain any U.S. citizen indefinitely without charges, and even the most establishment-minded American should be able to see what is coming. 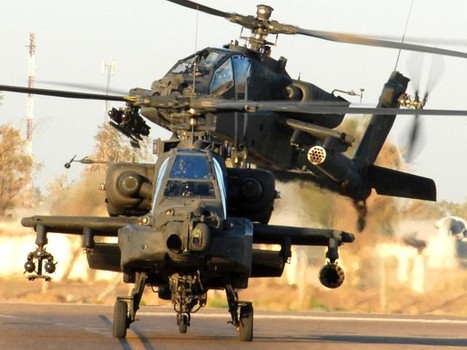 As if the Obama administration’s purchase of more than 2 billion rounds of ammunition, and nearly 3,000 urban tanks, along with their unprecedented (and highly illegal) domestic spying program was not enough to convince you that the federal government is about to suspend the Constitution once and for all, the man who once vowed to run “the most transparent administration in history” has just rather inexplicably, ordered the U.S. Army to seize every Apache attack helicopter currently in use by the National Guard.

In all, the Defense Department will confiscate 192 Apaches from National Guard units around the country and give them to the active duty Army.

In exchange for the heavily armed and highly maneuverable choppers, Guard units will receive 111 UH-60 Blackhawk transport helicopters from the Army, Defense One reports.

Last week, U.S. Army Chief of Staff Gen. Ray Odierno testified before the Senate Armed Services Committee, claiming that the measure will save taxpayers $12 billion, over the next three years.

Of course, when one considers that this ‘cost saving’ move comes from an administration which regularly runs trillion-dollar deficits and, to date, has proposed no less than 442 tax increases since taking office in January 2009, the idea of saving money for the American taxpayer is a bit hard to swallow.

So, what could be another, more reasonable explanation?

The Apache, which began service in 1986, is armed with a 30 mm M230E1 Chain Gun (with 1,200 rounds), Hellfire anti-tank missiles, and 70 general-purpose 70 mm rockets. In short, it is capable of fending-off any enemy, foreign or domestic.

Obviously, these helicopters could pose a substantial obstacle to say, a tyrant drunk on his own power, with an army at his disposal.

With the recent, attempted seizure of the Bundy family ranch in Nevada by more than 200 armed federal officers, including many snipers, we know that the Obama administration is not afraid to use force against the American people.

Furthermore, considering the unprovoked attacks and murders of U.S. citizens on their own property by federal agents, such as the Ruby Ridge and Waco massacres, we also know that the federal government has no problem suspending due process and using lethal force on its own citizens. Couple that with the as yet, unexplained, massive arms buildup by the Department of Homeland Security, and the National Defense Authorization Act which allows the feds to arrest and detain any U.S. citizen indefinitely without charges, and even the most establishment-minded American should be able to see what is coming.

There are a few governors around the country who would not stand for martial-law being arbitrarily declared by this or any president, but without any teeth (i.e. Apache attack helicopters) what could they use to stop Obama’s tyranny?