A day after Venezuela formally devalued its currency by way of the new and improved FX central planning system SICAD II, which sent the official value of the Bolivar 89% lower, the government desperately needed a distraction. It got just that when earlier today Socialist par excellence Nicolas Maduro announced that he had narrowly avoided a coup after he arrested three air force generals suspected of plotting an uprising against the leftist government.

Maduro told a meeting of South American foreign ministers that the three generals, who were not identified, had been in contact with the opposition and “were trying to rise up against the legitimately constituted government.”

“This group that was captured has direct links with sectors of the opposition and they were saying that this week was the decisive week,” Maduro said.

He said the generals had already been summoned before a court martial, adding that the plot was discovered because other officers had come forward to say they were being recruited.

The disclosure comes amid a broadening government crackdown against Maduro’s opponents after weeks of street protests that have left at least 34 dead.

On Monday, National Assembly president Diosdado Cabello announced that a prominent opposition deputy, Maria Corina Machado, had lost her seat and parliamentary immunity, and could be arrested at any moment.

Last week, two opposition mayors were arrested, and another prominent opposition leader has been in jailed for a month, accused of inciting violence.

Ironically, while the entire international community was fuming over the “crackdown” on peaceful, if CIA-funded, Ukraine protesters nobody has anything at all to say about the daily beatings and/or murders of civilians protesting Maduro’s cabinet. Why? Perhaps because while the west has already alienated Putin and his natural resources, the last thing it can afford is to tell another oil rich country, Venezuela, to take a hike.

As for the local population, it may need greater and more dazzling spectacles than this particular distraction if it is to avoid noticing that its currency just lost 90% of its official value overnight. At least the Caracas stock market continues to put even the US market bubble to shame. Finally, if the socialist paradise fails, one can always use stock certificates as toilet paper, single ply. 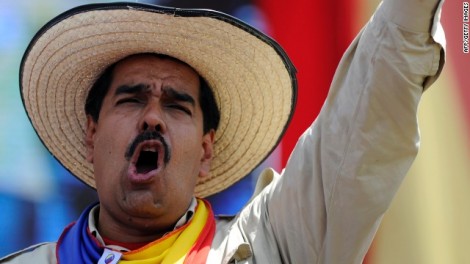