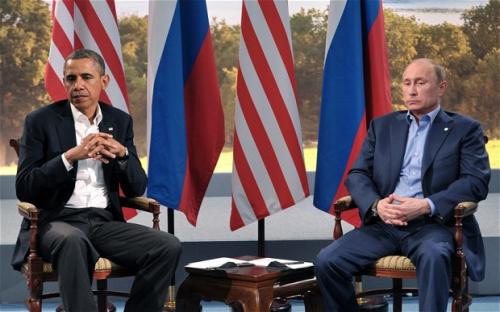 Just out from the Kremlin:

On the initiative of the US, a phone call took place between Vladimir Putin and the President of the US, Barack Obama.

Under discussion were the various aspects of the extraordinary situation in Ukraine.

In response to the concern expressed by Barack Obama regarding the possible use of Russian armed forces in the Ukraine, Vladimir Putin drew attention attention to the provocative, criminal acts of the ultranationalist elements, in effect encouraged by the present authorities in Kiev.

The Russian president stressed the existence of real threats to the lives and well-being of Russian citizens and numerous compatriots located in the Ukraine. Vladimir Putin underscored that should the violence spread further to the eastern regions of the Ukraine and the Crimea, Russia reserves the right to protect its interests and the Russian-speaking population living there.

Here is how this same conversation looked like from the perspective of the US. Via Reuters:

“The United States condemns Russia’s military intervention into Ukrainian territory,” the White House said in a statement outlining what was discussed in a 90-minute phone call between Obama and Putin.a

And in other news, the US president may or may not be present when needed.

Obama did not attend the WH national security meeting on Ukraine but was briefed by natsec adviser Susan Rice.