Current US foreign policy in a nutshell: Barack Obama tells Vladimir Putin “there will be costs” if Russia invades Ukraine. What does Putin do? He invades Ukraine. Only this time it’s official: AP reports that the Kremlin says Russian President Vladimir Putin has asked parliament for permission to use the country’s military in Ukraine. Putin says the move is needed to protect ethnic Russians and the personnel of a Russian military base in Ukraine’s strategic region of Crimea.

Vladimir Putin made an appeal to the Council of the Federal Assembly of the Russian Federation.

Putin also appointed Deputy Foreign Minister Grigory Karasin to be his official representative in the Federation Council when it considers his letter.

Earlier in the day, the Federation Council asked Putin to take “exhaustive measures” to protect Russians in Ukraine.

“We have urgently summoned the house Council and thought it necessary to make a statement assessing the current situation in Ukraine,” Federation Council Chairperson Valentina Matviyenko said.

She said a group of Russian senators, who had visited Crimea, had informed their colleagues about the situation in the Ukrainian autonomy and specifically in Sevastopol, the home base of the Russian Black Sea Fleet.

“Today there is a real threat to the life and security of Russian citizens living in Ukraine. There is a threat to our military in Sevastopol and the Black Sea Fleet, and I think that Russia should not be a bystander,” she said.

The main purpose of the Federation Council’s appeal to the president is to urge him “to take exhaustive measures, all possible measures, to ensure the security of our citizens living in Ukraine, help our brotherly Ukrainian people achieve stabilisation and channel the current crisis into a civilised legal track so that the agreements that were signed by the opposition leaders and the head of state were implemented strictly,” Matviyenko said.

She noted that members of the Federation Council “asked the president to take exhaustive measures to prevent further escalation and put the resolution of the political crisis onto a legal track so that those who have grabbed power did not hurry so much and did not trample upon the rights of people and different regions of Ukraine.”

“The agreement [of February 21] clearly determined the sequence of steps. A constitutional reform first – it was supposed to be carried out with broad participation of public and political forces and regions in order to work out a consensus-based document that would be supported by all people in Ukraine. According to international practices, such serious documents should be adopted in a national referendum,” Matviyenko said.

Having expressed regret that this had not happened, she noted that “the speed with which presidential elections have been announced [in Ukraine] puts its legitimacy in question.”

“The agreement calls for forming a government of national accord, which means that it should include representatives of all political forces. In reality we see that the government, which was approved to the stomping of the Maidan, did not include all political forces and was formed from opposition parties only,” Matviyenko observed.

She also said that “the heads of regions were not summoned for consultation.” So “we can understand why there are protests in regions, except for Western regions of Ukraine,” she added.

Matviyenko called for finding “a calm, civilised and legal solution to the crisis” and stressed that “there is no need to demonstrate high political and diplomatic culture in this case because we can see that this is neither appreciated nor understood, and most importantly the security of people will not be ensured.

RIA further adds, the military use is virtually assured as it was leaders of Russia’s upper and lower houses of parliament who first called Saturday on President Vladimir Putin to stabilize the situation in Crimea and protect Russian citizens.  The leader of Federation Council, Russia’s upper house, said the use of military force in the former Soviet nation could be justified after the opposition swept into power in Kiev last weekend.

More from the RT:

“In this situation it would even be possible, on the request of the Crimean government, to bring in a limited contingent [of troops] to guarantee security,” Valentina Matviyenko said.

The partition of Ukraine has become increasingly likely in recent days as heavily armed men understood to be Russian soldiers have taken control of key facilities and blocked roads in Crimea.

About 60 percent of the residents of Ukraine’s southern peninsula are ethnic Russians with the remainder of the population made up of Ukrainians and Crimean Tatars, who largely support the incoming regime.

The State Duma, Russia’s lower house, released a similar statement Saturday that said must Putin bring the situation in Ukraine under control.

“All available means” should be deployed to protect Russian citizens, said Sergei Naryshkin, a former head of the presidential administration and the current parliamentery speaker in the Duma.

The Crimea has been visited by a series of Russian Duma deputies in recent days, including former boxing champion Nikolai Valuev, former figure skater Irina Rodnina, and the first woman in space Valentina Tereshkova.

Pro-Russian protests calling for secession have taken place sporadically across the southern and eastern Ukraine since President Viktor Yanukovuych was toppled from power a week ago.

Meanwhile, international media has reported widespread military movements, believed to be units from Russia’s Black Sea fleet headquartered in Crimea, including tanks and helicopters that began on Tuesday. Ukrainian officials have accused the Kremlin of provoking conflict and called on Russia to return all soldiers to their bases.

The breakdown of the final vote: 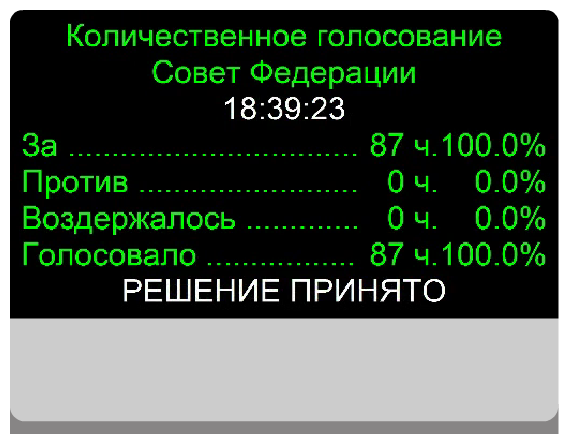 Balaclava now. The entrance to the coast guard base pic.twitter.com/s2p6v157m5

Needless to say all of this is just for show: as we have been reporting for the past 4 days, Russian troops have long since been in Ukraine.

More importantly, it appears Putin is not very concerned about the impact his actions will have on equity futures when they open for trading on Sunday evening: but… but… the artificial “on paper” wealth effect. On the other hand, he certainly has a lot of concern to keep geopolitical events of the type that keep the price of crude high, always at arms length.

1 thought on “Putin To Use Military In Ukraine”