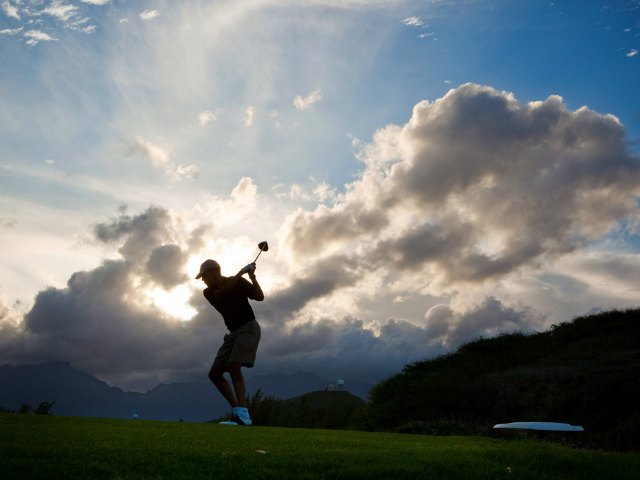 After preaching shared sacrifice to assuage the California water shortage, Obama has played some of the country’s thirstiest golf courses

President Barack Obama traveled to California on Friday to highlight the state’s drought emergency at two events near Fresno, calling for shared sacrifice to help manage the state’s worst water shortage in decades. He then spent the rest of the weekend enjoying the hospitality of some of the state’s top water hogs: desert golf courses.

Vacationing with DVDs of his favorite television shows and multiple golf outings with his buddies, the duffer in chief played at two of the most exclusive courses in the Palm Springs area. On Saturday, Obama played at the Sunnylands estate, built by the late billionaire Walter Annenberg, which features a nine-hole course that is played like 18 holes. The following day he golfed at billionaire Oracle founder Larry Ellison’s 19-hole Porcupine Creek. On Presidents’ Day, Obama hit the links at Sunnylands once again.

Of course, golf is a vital industry to the tourist paradise with streets named for Presidents and Hollywood stars, but the two courses Obama selected are among the most exclusive, seeing far fewer rounds per year than nearby courses. Sunnylands, owned by a trust, is not open to the public. Ellison’s course hosts charity events, but is also closed to the general public. Ellison himself has said he doesn’t golf.

Local golf officials realize they have a problem and are working to reduce their consumption. Water utilities are trying to transition the courses to using nonpotable reclaimed water, instead of groundwater, for irrigation. In recent years, the 200-acre (80.9-hectare) Sunnylands has cut back on the amount of turf grass and installed a more efficient irrigation system, according to a press release from the course operators. The course has prepared to transition to an as-yet-unfinished citywide reclaimed-water system. “The Annenberg Retreat at Sunnylands has taken significant measures to reduce water usage,” Geoffrey Cowan, the president of the Annenberg Foundation Trust at Sunnylands, said in the release. “In consideration of the conditions that led Governor [Jerry] Brown to make a drought declaration, reducing water consumption is a more important priority than ever,” Cowan said. A spokesman for the foundation did not immediately respond when asked how much water the course consumes.

Water data for Porcupine Creek was not available, though the 246-acre (100-hectare) property reportedly features an “80-ft.-diameter fountain ringed with 90 individually lit jets that shoot water up to 80 ft. high.”

“It can’t just be a matter of there’s going to be less and less water so I’m going to grab more and more of a shrinking share of water,” Obama said on Friday in Los Banos. “Instead what we have to do is all come together and figure out how we all are going to make sure that agricultural needs, urban needs, industrial needs, environmental and conservation concerns are all addressed.”

Republicans were quick to pounce on Obama’s water-intensive golf weekend. “We have seen this brand of hypocrisy from President Obama before — this time it seems his soapbox doubles as a tee box,” said RNC spokeswoman Kirsten Kukowski. A White House official declined to comment on the record for this story.