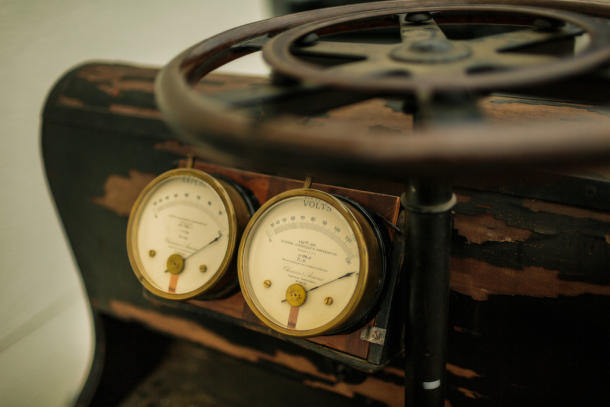 It looks steampunk, but it’s really an electric vehicle.(Credit: Porsche)

The very first Porsche, an electric carriage, sat untouched in a warehouse for 111 years, but now it’s come home.

On June 26, 1898, Ferdinand Porsche’s “Egger-Lohner C.2 electric vehicle,” better known as the “P-1,” rolled on to the streets of Vienna for the first time. In 1899, the P-1 took the gold medal (by a full 18 minutes!) against a field of other electric vehicles in Berlin. Then in 1902, as Porsche put the first all-wheel drive passenger car into production, the P-1 was parked in a warehouse…where it sat untouched for the next 111 years.

After missing two world wars, the entire Berlin Wall era, and six “Fast and Furious” flicks during the intervening 11 decades, Porsche says in a release (PDF) the P-1 has now been recovered and is on permanent display, unrestored, at the Porsche Museum in Stuttgart, Germany.

It’s not too hard to imagine how this historic relic could have been forgotten so long, given that it resembles a horse-drawn carriage. But a look under its wooden frame reveals a novel octagon-shaped compact electric motor weighing only 286 pounds and capable of 3-horsepower output. However, the P-1 ran off more than 1,100 pounds of lead-acid batteries, giving it an impressive range of 49 miles or 3 to 6 operational hours. I struggle today to get that kind of performance out of my laptop — maybe I’m not carrying around enough lead-acid batteries?

The official unveiling of the P-1 is set for this Friday at the museum. If you can’t make it to Germany, you can also get up close with this godfather of today’s Tesla in the gallery below: