– Here’s Why Real Preppers Should Be Prepared To Defend Themselves: The ‘Spartan Survival’ Doomsday Preppers: ‘We Are Your Worst Nightmare And We Are Coming …’ 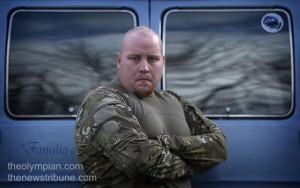 The neighbors of Tyler Smith can breathe a little easier. He is in jail and, you know, it couldn’t have happened to a nicer guy. (ahem)

Remember the episode of National Geographic’s Doomsday Preppers back in November in which a camo-clad moron warned the preparedness community of his impending attacks on their homesteads? (You can refresh your memory HERE)

Well, as it turns out, there IS something that can be done to stop him. Smith is a convicted felon.  A truly stellar individual, he’s a level one sex offender who was convicted in 2009 of communicating with a minor for immoral purposes, when he inappropriately touched a drunken 14-year-old girl in an Auburn parking lot. He was also convicted of stealing a motorcycle in 2009.

Being a convicted felon precludes the ownership of firearms.

So all of those guns he was showing off on TV when he was boasting about his firepower? Illegal.

Smith, for his 15 minutes of fame, just landed himself back in jail (which, given his desire to steal from preppers in a disaster scenario, might just be the best place for him).

[Sheriff’s department spokesman Ed] Troyer said the Buckley man came to the department’s attention “by people all over the country bringing him to our attention.”

Deputies have been investigating Smith since the television episode aired Nov. 12.

“We have video and pictures of him (Smith) loading guns and firing them,” Troyer said. “He verbally expressed a threat to his neighbors while being armed.”

“If I could (afford it), I would fire a couple thousand rounds a day,” Smith said at the time.

He also said he had a regional map of places he can get supplies by force, and studied medicine, including how to perform a cesarean section on his wife.  (source)

If you recall, Smith smugly referred to himself as the “apex predator” in his area.  He warned, “We’ll kick your door in and take your supplies. … We are the marauders.”

It looks like this particular “apex predator” is no longer at the top of the food chain.