– Tepco: We should have told public this sooner… we failed to cool molten fuel after meltdowns began — Experts: Fukushima cesium release could be more than triple Chernobyl (PHOTO) (ENENews, Dec 14, 2013):

Asahi Shimbun, Dec. 14, 2013: Fire engines were used in a desperate, and ultimately futile, attempt to pump water to cool overheating reactors during the early phase of the 2011 Fukushima No. 1 nuclear power plant disaster, Tokyo Electric Power Co. said. According to a Dec. 13 report by the operator of the crippled facility, water was pumped in sufficient quantity to avert core meltdowns in the No. 1, No. 2 and No. 3 reactors, but much of it strayed into irrelevant pipes and ended up elsewhere. […] water failed to cool it and the other reactors efficiently, and could not stop the core meltdowns in the No. 1, No. 2 and No. 3 reactors. […] TEPCO officials said they knew as early as late March 2011 […] “We should have shared the finding with the public in the belief it would help promote universal safety, but failed to do so,” said [a] TEPCO Managing Executive Officer […] 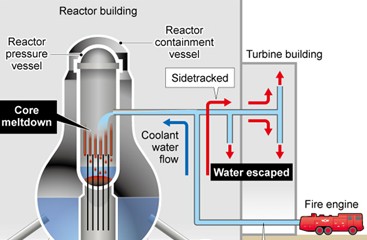 Estimate of Consequences from the Fukushima Disaster, Nordic PSA Conference (nuclear utilities in Finland and Sweden), September 2011: Estimate of releases from aerial survey […] The National Nuclear Security Administration NNSA (USDOE) has published an aerial map of projected one year doses from contamination. […] The assessment takes into account symmetrical deposition on the ocean, weather patterns […] a correction for the remainder of activity in the cloud beyond 100 km, and a further correction for continuous low level releases for the rest of the time that it will take TEPCO to stop them […] which gives the final assumption for Cs137 release of 2.85 E+17 Bq […] it could be assumed that the results obtained with this method can be interpreted as an upper bound of all estimates. […] Table 6 Comparison of estimates of releases

1 thought on “TEPCO: We Should Have Told Public This Sooner … We Failed To Cool Molten Fuel After Meltdowns Began – Experts: Fukushima Cesium Release Could Be More Than Triple Chernobyl”