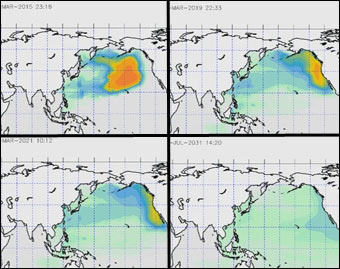 (Note that the total ocean release used in the model is just 1/3 of the estimate by other researchers. It also does not take into account the daily release of 400 tons of radioactive water from the plant that’s likely been ongoing since soon after 3/11.)

China-Korea Cooperation on the Development of Ocean Monitoring and Prediction System of Radionuclides: In this study we are concerned with long-term oceanic-scale dispersion of Cs 137 released from the Fukushima Daiichi NPP. […] The information that helped us to determine the source term of radioactive materials for the numerical experiments was the concentrations of radioactive materials in the ocean reported by Tokyo Electric Power Company (TEPCO). […] using monitoring data from the web site of TEPCO near the northern and southern discharge channels of the Fukushima Daiichi NPP. […] Assuming a total release of 9 PBq of 137 Cs from the Fukushima Daiichi NPP into the marine environment (only including liquid releases on the Pacific Ocean), the simulation is carried out up to 2041.

Arirang News, Aug. 30, 2013: Most of the radioactive water from the crippled Fukushima nuclear plant in Japan is expected to follow a current and spread into the Pacific Ocean. This simulation, created by a team of Korean and Chinese researchers, shows the likely flow of radioactive water from the Fukushima nuclear plant in Japan,. as carried by the Kuroshio current. The radioactive water will merge with the strong currents of the Kuroshio and flow east. It could reach U.S. and Canadian waters in four to five years. That’s because the current eventually begins to flow towards the western waters of North America. […] [Some] have raised concerns,. saying that continuous inspections and monitoring are required, as the exact amount of radioactive water that has leaked into the ocean is unclear.Watch the dispersion model here