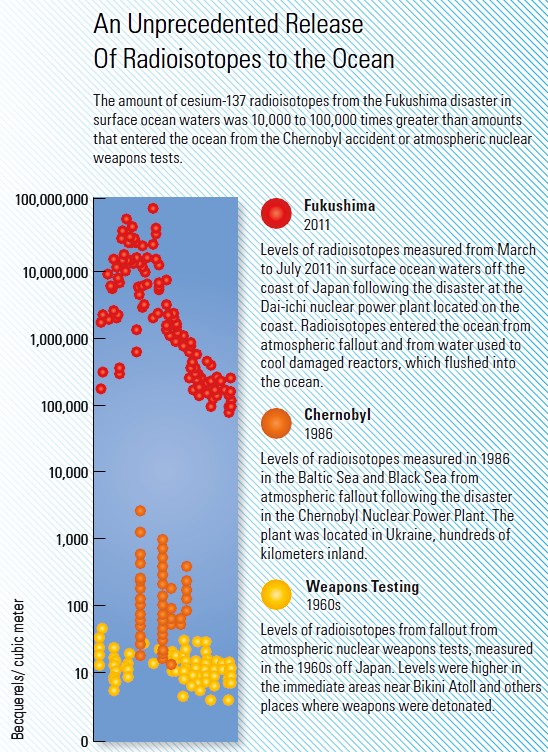 Oceanus Magazine, May 2013: Prior to Fukushima, however, the levels of cesium-137 off the coast of Japan, as cataloged by Michio Aoyama at the Meteorological Research Institute in Japan and others, were among the world’s lowest, at around 2 becquerels per cubic meter (1 becquerel, or Bq, equals one radioactive decay event per second). Against this background, the concentrations measured in early April of 2011 were all the more alarming. […] The amount of cesium-137 radioisotopes from the Fukushima disaster in surface ocean waters was 10,000 to 100,000 times greater than amounts that entered the ocean from the Chernobyl accident or atmospheric nuclear weapons tests.

Ken Buesseler, Senior scientist at Woods Hole Oceanographic Institution, March 11, 2013: I’ve had to use this crazy tall and logarithmic scale to get the range of concentrations […] how much cesium was in the ocean off Japan. Each red point is a sampling by an individual taken in, actually released by TEPCO. A little complicated to find the data but they were openly released and I translated them to the right units and made some corrections. Each red dot will tell me how much radioactivity was at that point along the coast on a given date. So they start out here around 10,000, the very first measurements that were made, peaking up here, up to 50 million [becquerels per cubic meter]. That’s a very alarmingly high number […]

See also: Senior Scientist: Chernobyl was nothing with potential of Fukushima right on ocean — No way to contain all this radioactive water — You can’t stop groundwater flow — Every bit of news we’re getting is radioactivity numbers are going up