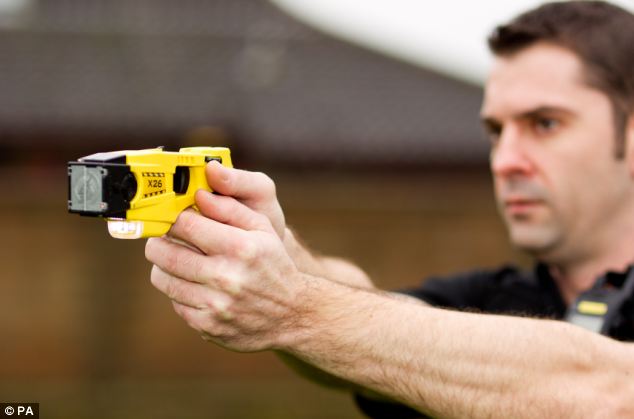 Tasers are being used by police against children as young as 11 almost every day, figures have revealed.

Armed officers discharged, targeted or threatened to use the 50,000-volt weapons against youngsters more than 320 times a year – an 11-fold increase from the first year they were cleared for use against under-18s in 2007.

It emerged earlier this year that a girl aged just 12 had been shot by police with a Taser device in St Helens. Other children aged 11 have been threatened by officers with the weapons, forced have admitted.

Critics pointed out that the revelations about the controversial of Tasers by the police come at a bad time for forces – just as they are ‘in the dock’ over their conduct in the Plebgate scandal.

In the first year of officers being cleared to Taser children, they were used just 29 times in England. By 2009, this total had increased to 135.

New figures released to Parliament show that one year later, in 2010, the weapons were used 339 times against children. By 2011 – the latest year that figures are available, the total stood at 323.

The figures were not broken down into whether the guns were fired, or whether officers targeted children with a red dot laser to threaten them.

Sophie Khan, solicitor-advocate specialising in Taser-related injuries and director of Police Action Centre, said she was appalled by the findings – and called for the use of Tasers on children to be prohibited.

‘It is shocking that Tasers have been used on under 18s nearly once a day for the last two years,’ she said.

‘Tasers should only be used on children and young adults if there is no other feasible way to restrain them due to the specific health risks they could suffer. If the Taser is fired at their chest there is a higher risk they will suffer a cardiac arrest.

‘The statistics show that the Taser is being used in contravention of the Taser Policy and Guidance, due to the dramatic increase in their use on under 18’s. This needs to be addressed by the police forces immediately before there is a serious injury caused to a child or young adults.’

David Green, chief executive of the Civitas think tank, said: ‘It seems there is a risk of misuse of Tasers, that the police will use them as an on-the-spot punishment.
‘These figures come at a time when the police is in the dock over perceived untrustworthiness.’

In one of the most shocking cases, Merseyside Police shot a 12-year-old girl in St Helens as she brandished two knives and threatened to harm herself.

At the time a spokesman said: ‘The Taser was deployed as a means to safely detain the girl and prevent serious harm to both her, the public and the officers.

‘The girl was uninjured and was subsequently arrested and cautioned for the offence.’

Freedom of Information requests have revealed that over the past three years, at least six children aged only 14 have been shot with Tasers, four ages 15 and 13 aged 16. Children as young as 11 have been threatened.

The latest figures, released following a parliamentary question asked by Lib Dem backbencher Julian Huppert, did not break down the 2011 figures into the way the stun guns were deployed.

But figures for 2009/10, released last year, show that of the 114 usages against children, 31 had been shot with Tasers – where an officer pulls the trigger shooting out a pointed barb attached by a wire to deliver an electric shock.

Another 74 were ‘red dotted’ – a threatening gesture by officers pointing the Taser at the child pinpointing exactly where the barbs will hit their body with a red ‘sniper’s’ dot.

Experts say even deploying the red dot is still very threatening and can constitute assault.

On 18 occasions the Taser was ‘drawn’ by police as a show of force, while in nine cases the ‘drive stun mode’ was used to stun a suspect.

Only specialist officers can use Tasers at present, but last year the Police Federation called for every officer to be armed with one. There are 12,000 Tasers on the streets.

Official guidance from the Association of Chief Police Officers states that ‘children and adults of smaller stature as being at potentially greater risk from the cardiac effects of Taser currents than normal adults of average or large stature’.

The 2008 document added: ‘Until more research is undertaken to clarify the vulnerability of children to Taser currents, children and persons of small stature should be considered at possible greater risk than adults.’

Last night Julian Huppert, the Lib Dem MP who uncovered the statistics, said: ‘It is very alarming that hundreds of children are having Tasers used against them every year.

‘Whilst of course they do have a role, the Home Office should have a better grip on exactly when they are being used.

‘It’s alarming how many children are being targeted. It seems that, step by step, we are moving closer to a militarised police force rather than a civilian police force.’

Last year police were accused last night of behaving like ‘thugs with weapons’ after firing a 50,000-volt Taser into the back of a blind man.

An officer mistook stroke victim Colin Farmer’s white stick for a samurai sword and discharged the stun gun – leaving the retired architect writhing in agony on the ground.

Last night a spokesman for the Home Office said: ‘The Home Office and the police have rigorously tested Taser and independent medical assessments have concluded that the risk of serious or life threatening injuries is low.

‘They are only used by officers who have been carefully selected and trained and in situations where there is a serious threat of violence.

‘Taser provides the police with an additional tactical option that is less-lethal than conventional firearms and there have been no reported serious injuries or deaths in the UK directly linked to their use.’