– To Boldly Go Where No Socialist Has Gone Before: Venezuela Creates Ministry Of Supreme Happiness (ZeroHedge, Oct 26, 2013):

If one (such as everyone at the Federal Reserve) thought that the world’s greatest artificial “wealth effect” would also generate the world’s happiest people, one would be dead wrong.

Take Venezuela – Hugo Chavez’ socialist paradise, which was recently inherited by Nicolas Maduro, when he proceeded to not only completely devalue the local currency but to engineer, through such exquisite central-planning that even the Politburo at the Marriner Eccles building is green with envy, the highest returning stock market on earth in 2013. Alas, either the locals are not quite as impressed with the Caracas’ “stock market” YTD return of over 300% (which doesn’t quite cover the loss in purchasing power for what things one can actually purchase in Venezuela)… 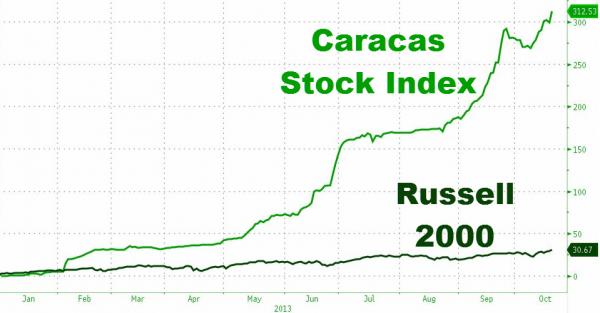 … or the chronic toilet paper shortages remind them that the phrase socialist utopia is the world’s greatest oxymoron.

As a result, president Maduro has decided to boldly go where no socialist has gone before and has unveiled a new Vice Ministry of Supreme Social Happiness, whose primary purposes will be to enforce “happiness.” In other words,  something along the lines of the beatings will continue until happiness returns…

Americans may have the constitutional right to pursue happiness, but Venezuela now has a formal government agency in charge of enforcing it. President Nicolas Maduro says the new Vice Ministry of Supreme Social Happiness will coordinate all the “mission” programs created by the late President Hugo Chavez to alleviate poverty.

Wags had a field day Friday, waxing sarcastic on Twitter about how happy they felt less than 24 hours after the announcement.

Oil-rich Venezuela is chronically short of basic goods and medical supplies. Annual inflation is running officially at near 50 percent and the U.S. dollar now fetches more than seven times the official rate on the black market.

Shockingly, to some average Caracans, happiness does not mean buying AMZN at a PE of N/M and selling it a PE of !Ref#. Instead, it means getting hammered.

In downtown Caracas, fruit vendor Victor Rey said he’s now waiting for Maduro to create a vice ministry of beer. “That would make me, and all the drunks, happy,” he said.

Meanwhile, others point out the blindingly obvious:

A TV journalist whose show was recently forced off the air after he refused to censor political opponents of the ruling socialists, Leopoldo Castillo, called Maduro’s announcement an international embarrassment.

Obviously Leopoldo has never heard of ObamaCare… or the NSA.

Housewife Liliana Alfonzo, 31, said that instead of a Supreme Happiness agency she’d prefer being able to get milk and toilet paper, which disappear off store shelves minutes after arriving at stores.

Ultimately, Venezuela’s current predicament may be largely blamed on one thing: reckless entitlement and welfare spending (with lots of corruption thrown in for good measure).

Chavez spent billions on social programs, from benefits for single mothers to handouts of apartments and major appliances.

At least he never spent hundreds of millions rolling out a untested website, whose end purpose was to prove to everyone that if one needs something broken beyond any hope of repair, just put the government in charge.

As for the US, already elbow deep in its own unsustainable socialist agenda, we can hardly wait for the latest diversionary campaign: one which sweeps the epic debacle that is Obamacare under the rug following the roll out of, what else, ObamaJoy.