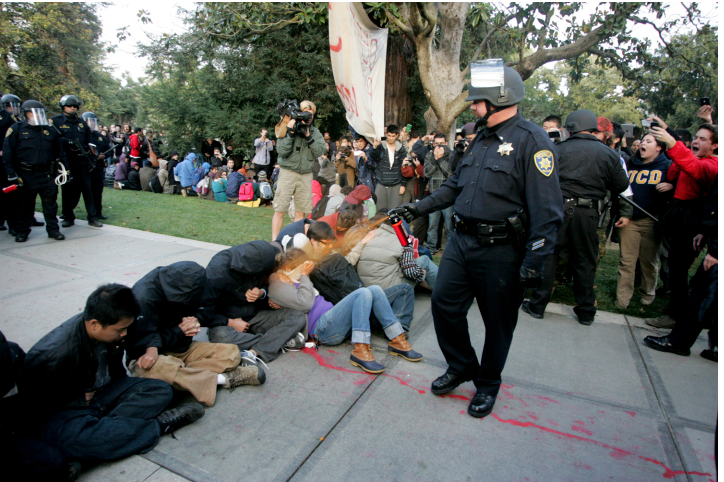 Yep, that’s John Pike, the infamous pepper spray cop who walked across a group of seated student engaged in an act of peaceful civil disobedience and callously pepper sprayed them in the face. While Pike was eventually fired, an internal investigation found that he “acted appropriately.” For all his troubles, the University has now decided he deserves a $38,000 settlement.

A former University of California Davis police officer who pepper-sprayed a group of Occupy protesters has reached a $38,000 settlement in a workman’s compensation case against the school.

John Pike, who was filmed discharging pepper spray at a line of seated demonstrators in a video that was watched around the world, received the compensation last week.

The Davis Enterprise reported that Pike, 40, had suffered depression and anxiety brought on by death threats to him and his family. The threats followed the 18 November 2011 protest, the newspaper reported.

Bernie Goldsmith, a Davis attorney supportive of the student protesters, told the Associated Press that the settlement “sends a clear message to the next officer nervously facing off with a group of passive, unarmed students: Go on ahead. Brutalize them. Trample their rights. You will be well taken care of.”

Let’s also not forget about the fact that there are 50,000 SWAT team raids in America each year. USA! USA!