Tokyo, and the entire country of Japan, which the documentary below describes as “a place where socially awkward people gather and use money to resolve their communication problems”, has a ticking demographic time-bomb: on one hand the population is getting so old that sales of adult diapers now exceed those for babies; on the other as the chart below courtesy of Mark Adomanis shows, the number of actual births each year has dropped to a record low. 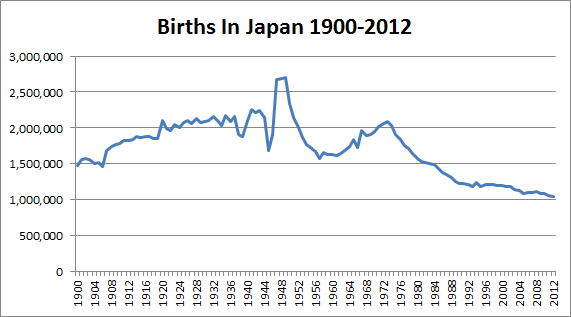 Whether it is the women’s fault, described as “so infatuated with their careers that work trumps a boyfriend or husband”, or men “a generation obsessed with virtual reality and so intimidated by real women that they prefer cyber girlfriends over real relationships” is unknown, and irrelevant.

There is another angle. As this documentary from Vice investigates, “sex sells and the Japanese are buying.” The reason: Japan has a “seemingly infinite menu of relationship replacement services.” And who really needs the hassle of a steady significant other when on one hand the gamma radiation levels keep creeping higher and higher by the day meaning the threat of a random mutant appendage emerging is no longer negligible, and on the other Abenomics is making everyone feel wealthier, even as everyone actual purchasing power implodes, leaving everyone but the 0.1% broke and starving.

Has Japanese society crossed the Rubicon into full devolution (and after watching the video below you will understand why), where cheap single-serving sexual thrills and intimacy replacement have overtaken the household unit as the hub of society?

The reality is that unless something drastically changes between the demographic singularity the country is rapidly headed toward, the Fukushima disaster which hits new spilled radioactivity records on a daily basis, and the emotional detachment that the locals (don’t) feel toward each other, in a few years none of this will matter.

Worst of all: Japan is merely the test tube baby, pardon the pun, for the rest of the insolvent “developed” world. What happens in Japan, is coming to a broke centrally-planned country near you.

For all this and much more (those who want to skip the autistic Japanese parts and go straight to the Yakuza meeting, proceed to 9 minutes into the clip) watch the Vice clip below.

Japan is a country that is dying—literally. Japan has more people over the age of 65 and the smallest number of people under the age of 15 in the world. It has the fastest negative population growth in the world, and that’s because hardly anyone is having babies. In these difficult times, the Japanese are putting marriage and families on the back burner and seeking recreational love and affection as a form of cheap escape with no strings attached. We sent Ryan Duffy to investigate this phenomenon, which led him to Tokyo’s cuddle cafes and Yakuza-sponsored prostitution rings.

1 thought on “‘Sex Sells And The Japanese Are Buying’: A Look At Japan’s Love Industry (Video)”