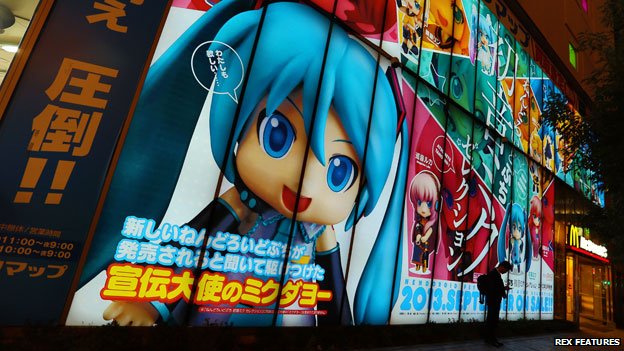 Manga and anime advertising posters on a building in Akihabara, Tokyo

Unless something happens to boost Japan’s birth rate, its population will shrink by a third between now and 2060. One reason for the lack of babies is the emergence of a new breed of Japanese men – the otaku, who love manga, anime and computers more than sex.

Tokyo is the world’s largest metropolis and home to more than 35 million people, so on the face of it, it is hard to believe there is any kind of population problem at all.

But Akihabara, an area of the city dedicated to the manga and anime subculture provides one clue to the country’s problems.

Akihabara is heaven for otaku.

They are a generation of geeks who have grown up through 20 years of economic stagnation and have chosen to tune out and immerse themselves in their own fantasy worlds.

It seems they no longer have the ambition of the post-war alpha males who made Japan such an economic powerhouse and no interest in joining a company and becoming a salary man.

They have taken on a mole-like existence and, worryingly, withdrawn from relationships with the opposite sex.

A survey by the Ministry of Health, Labour and Welfare in 2010 found 36% of Japanese males aged 16 to 19 had no interest in sex – a figure that had doubled in the space of two years.

I met two otaku, who believe themselves to be in relationships with virtual girlfriends.

Yuge and Nurikan discuss their relationships with Rinko and Ne-Ne

This girlfriend is actually a Nintendo computer game called Love Plus, which comes as a small portable tablet.

Nurikan and Yuge take their girlfriends, Rinko and Ne-ne, on actual dates to the park, and buy them cakes to celebrate their birthdays.

“It’s the kind of relationship we wish we’d had at high school,” says Nurikan. 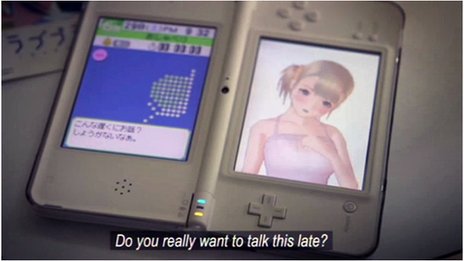 “As long as I have time, I’ll continue the relationship forever,” says Yuge, who is 39.

“As she’s at high school, she picks me up in the morning and we go to school together. After school we meet at the gates and go home together… In the game I am 17.”

Yuge says he often puts Ne-ne – or the games console containing her – into the basket of his bicycle, then he takes photographs of them at his destination.

Though Yuge would like to meet a real woman, and Nurikan is married, they say this is easier than having a real girlfriend.

“At high school you can have relationships without having to think about marriage,” says Yuge. “With real girlfriends you have to consider marriage. So I think twice about going out with a 3D woman.”

Nurikan says he keeps Rinko a secret from his wife, and hopes he never has to choose between them.

It’s hard to avoid feeling that otaku are in a perpetual state of childhood and are quite comfortable with their lives this way.

Exactly why they have retreated into fantasy land is not obvious. 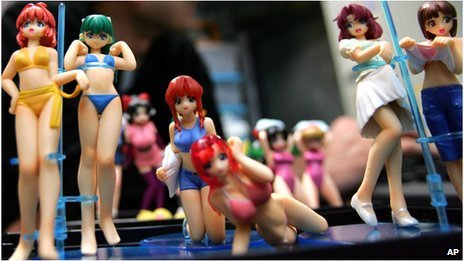 Anime figurines on sale in Akihabara

Tokyo-based social commentator Roland Kelts says many young Japanese men are pessimistic about the future. They don’t believe they will match their parents’ wealth and don’t want to commit themselves to relationships.

“If you compare China or Vietnam, most of those kids on scooters going to nightclubs, and dancing their heart away and perhaps having sex – they know it’s getting better, they know they are probably going to rock their parents’ income,” he says. “No-one in Japan feels that way.”

Several surveys have shown that even when Japanese men and women are in relationships, they have very little sex. In one survey just 27% said they had sex every week.

Marriage rates are also plunging, and very few babies – only 2% – are born out of wedlock.

Japan’s demographic timebomb is also linked to the lack of immigration.

In Britain one in eight people were born abroad, compared to one in 60 in Japan. But immigration in Japan is still heavily restricted, despite a dearth of some qualified workers.

In Britain there are 60,000 healthcare workers from overseas, while in Japan – where there is a serious shortage of nurses – there are only 60.

Japan has managed to preserve its unique culture in an increasingly globalised world but could that very sense of identity stand in the way of solving its population problems?

Or is it just time for Japanese men to grow up, have more sex and make more babies?