The decision is widely seen as a safety appeal just days before the International Olympic Committee chooses between Tokyo, Istanbul and Madrid on which city will host the 2020 Olympics.

Despite Mariano Rajoy’s solemn promises that awarding the 2020 Olympics to Madrid would boost the Spanish GDP by 1.8% and lead to the creation of anywhere between 168,000 and a few hundred million new jobs (the latter number is a joke but since it comes from Rajoy, both are equally credible), the Olympic committee cut the Spanish contender before the final, which pitted Tokyo vs Istanbul. And when the final votes were tallied it was not even a contest: with 60 to 36 votes, the 2020 Olympics Games will be held in Tokyo: the city that was supposed to host the event in 1940 but due to the break out of World War II the event was delayed until 1964 (when it was almost cancelled again, permanently, following a modest escalation in nuclear deterrence between the US and USSR surrounding Cuba). Let’s hope history does not rhyme. 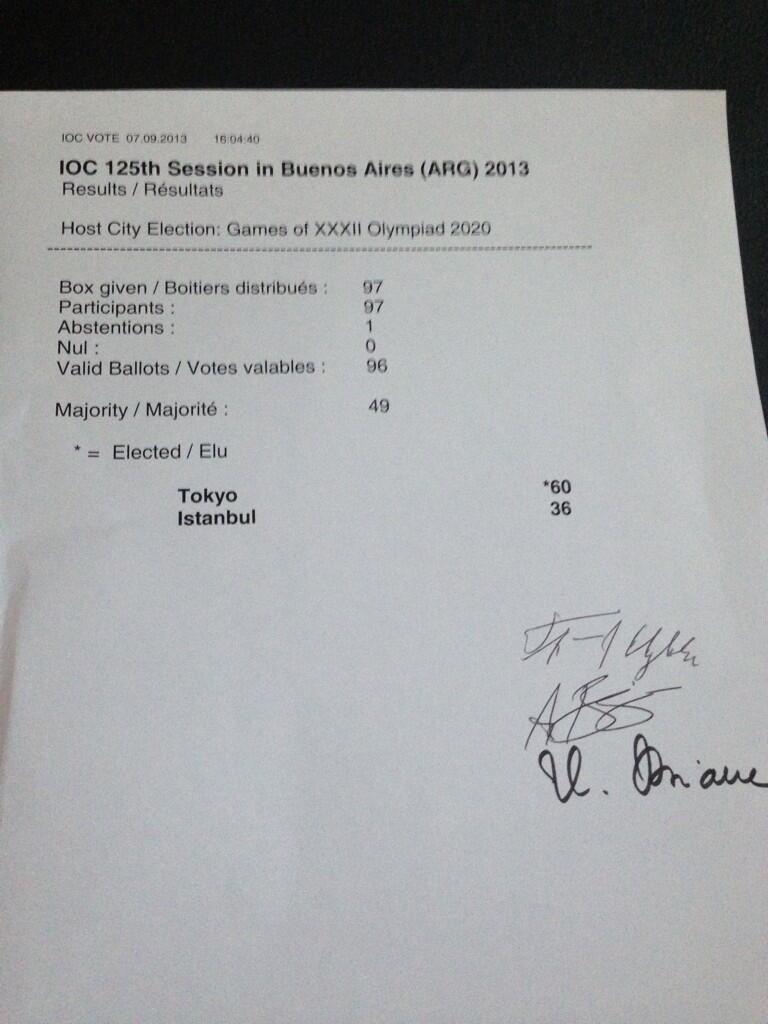 While congratulations are certainly in order to the country which already has JPY1 quadrillion in debt so what is a few extra trillion here and there: it’s not like any of it will ever be paid back, we do have some questions:

Naturally none of the above really matters since Japan will now be awarded something far more precious than Olympic Games: collateral, in the form of future construction, against which it can borrow even moar: because as Krugman will attest, 230% debt/GDP is for amateurs.

Some more from BBC:

Tokyo has been chosen to host the 2020 Olympic and Paralympic Games ahead of Istanbul and Madrid.

The Japanese capital won a final round of voting by International Olympic Committee (IOC) members in Buenos Aires to beat Istanbul by 60-36 votes.

Madrid had earlier been eliminated in a first-round ballot.

The announcement was met with jubilant scenes in Japan, as Tokyo prepares to host the event for the first time since 1964.

When IOC president Jacques Rogge – who will retire after 12 years in the role on Tuesday – announced the winning city, the Tokyo delegation jumped to their feet in celebration and waved the Japan flag.

A number of them were overcome with emotion and wept, after two years of intense lobbying.

The decision means Tokyo will become the first Asian city to host the Games twice.

They had previously been awarded the event in 1940, but the Games were cancelled because of World War II.

The success of Tokyo’s bid followed a personal address from Prime Minister Shinzo Abe during the presentation stage, in which he allayed fears over the crippled Fukushima nuclear plant 150 miles (240km) from the city by saying: “It has never done, and will never do any damage to Tokyo.”

Of course not: when is the last time Japan lied about anything radiation-related, or anything else for that matter?

Finally, as we posted over a year ago, Abe won’t be happy to learn that contrary to even further currency devaluation expectations – the whole premise behind his Abenomics charade – Goldman found out that the countries which host Olympics tend to see their currenc appreciate. Hardly the Nikkei boosting, USDJPY surging event for the country with the insane PenNikkeistock market, where anything less than a 3% daily swing is a snoozefest, that many will desperately make this out to be.

From July 2012: A Winning FX Strategy

In part three of our five-part series tying the Olympics to economics (previously here and here), we note that in a rather surprising coincidence, the Olympics’ host nation has been a rather simple tool to pick long-term ‘winners’ in the FX market. As Goldman points out, while we doubt that the Olympics directly affects the FX market, it has provided excellent long-term appreciation potential. We assume this means that the BoE will stop QE or we really don’t see cable extending this performance record, though the findings suggest that systematically picking the ‘next’ host tends to pick winners more than losers. 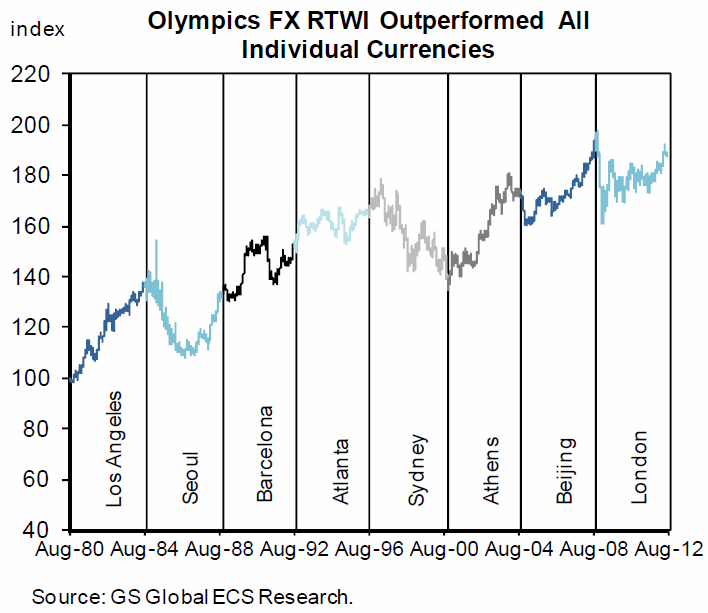 Goldman Sachs: The Olympics As A Winning FX Strategy

Is it possible that the Olympics affect foreign exchange markets? At first glance, this may seem unlikely as the Olympics are a relatively small event when compared to the size of the Global FX market, which turns over several trillion Dollars every single day. However, from an economic point of view, the question does make some sense. In a standard open economy model, government spending such as constructing the Olympic sites and improving the infrastructure typically leads to real appreciation. Also, a country hosting the Olympics is likely to see an influx of visitors during the actual Games. This would be recorded as a services export in the balance of payments and, all else equal, it would increase the demand for local currency.

To investigate whether the Games do affect FX markets, we constructed a real effective exchange rate for the Olympics, by combining the Goldman Sachs Real Trade Weighted FX Indices (GS RTWI) of the host countries starting after the Moscow Olympics in 1980. For example, the GS RTWI for the Chinese Yuan is used between August 29, 2004 (the closing date of the Athens Olympics) and August 24, 2008 (the closing ceremony of the Beijing Olympics). For host cities in the Euro area, we use the Euro RTWI.

The Olympic RTWI has appreciated by around 90% since the end of the Moscow Olympics in 1980, which is vastly more than any other individual currency (apart from a few hyperinflation cases with highly unstable exchange rates).

The table shows that the currency with the second strongest real appreciation was the Japanese Yen: it has appreciated by around 54% since 1980, and remains substantially below the appreciation of our synthetic Olympic index. This suggests that individual currencies do tend to appreciate more than usual in the run-up to hosting the Olympics. By systematically picking the next hosting currency, the Olympic FX Index tends to pick ‘winning’ currencies more often than ‘losers’.

However, there are a few important caveats. First, the four-year periods preceding the Seoul 1988, Sydney 2000 and London 2012 Olympics saw the host currency depreciate. In other words, the Olympic FX Index is not guaranteed an FX Gold Medal. Second, real effective exchange rates can appreciate because of high inflation rather than nominal appreciation. Carry may be higher as well, meaning that investors may still be able to benefit, but Olympic currencies are not guaranteed to appreciate in nominal terms.

To check the performance of the Olympic currency, we calculated the return to date on an initial investment of $100 in the Olympic currency at the end of the Moscow Games, including carry. Following the host country rules laid out above, this would mean that at the end of the Beijing Olympics the investment would have been shifted out of Renminbi and into Sterling. Starting with $100 in 1980, this Olympic investment would currently be held in Sterling and worth about $1,020. In comparison, investing $100 in rolling 1-year USD investments would have returned only about $700.

In summary, the empirical results suggest that a synthetic Olympic currency would outperform over time. Even though Olympic investment spending is a relatively small share of GDP (for example, around 0.8% for the UK 2012 Games), one potential explanation is that there is a positive selection bias in picking the host city. For example, countries with strong growth in the years before a decision would be able to invest more in their Olympics bid, increasing the chances of winning the Games. This is even more so if growth is supported by a structural story that lasts longer than just one business cycle. The Beijing Olympics are an obvious recent example.

Overall, we continue to doubt that the Olympics directly affect the foreign exchange market. However, the Olympics may be a rather simple tool to pick long-term ‘winners’ in the FX market with good long-term appreciation potential.

Finally, here is a reminder of the “benefits” the 2004 Summer Olympics delivered to Athens:

Infinite Unknown: Japan will totally collapse and be destroyed way before 2020.

Anyway, here’s why the decision by the International Olympic Committee is complete madness: