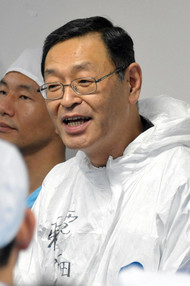 Former Fukushima Nuclear Plant Head Masao Yoshida, an engineer by training, led the fight to bring the Fukushima nuclear station under control in the immediate aftermath of Japan’s strongest earthquake on record and an ensuing tsunami that hit the plant on March 11, 2011, causing the worst nuclear disaster since Chernobyl. Photographer: Jiji Press/AFP via Getty Images

With a ridiculous monetarist experiment that is doomed to fail, currently raging in Japan, where girl bands plaud the masculinity of deranged FX and stock traders, it is easy to forget that some two years ago the country suffered the worst nuclear disaster in history. And what is worse, the delayed consequences, all of them tragic, will stay with Japan for the years and decades to come. We got a very sad reminder of the true Japanese tragedy (because deflation is only “horrible” if you live outside your means) earlier when we read that Masao Yoshida, the plant manager who led the fight to bring Japan’s Fukushima atomic station under control during the 2011 nuclear disaster, has died from esophageal cancer. He was 58. He died on July 9 at a hospital in Tokyo, according to a statement from Tokyo Electric Power Co., the operator of the Fukushima Dai-Ichi nuclear plant.

In keeping with the Japanese government’s tradition of lying about virtually everything “for the greater good” until after the bitter end, Tepco also reported that “the illness was unrelated to the radiation exposure after the nuclear accident.” Propaganda to get grandma and grandpa invested in NFLX is one thing, but propaganda when people’s lives is at stake is simply inexcusable. And yet it continues in Japan, and elsewhere in the developed world, to this very day.

Yoshida, an engineer by training, directed workers to stop the reactors from overheating after Japan’s strongest earthquake on record and an ensuing tsunami hit the plant on March 11, 2011, causing the worst nuclear disaster since Chernobyl. He stayed at the plant, helming the disaster response for almost nine months.

“I can not imagine how hard it was for him,” Tatsujiro Suzuki, vice-chairman of the Japan Atomic Energy Commission, said in an interview. “He had to make a decision that most of the on-site workers should leave because the situation was getting worse and he also had to have some of his staff remain to work with him. That was probably the hardest decision he ever had to make.”

Yoshida stepped down from his post on Dec. 1, 2011 after having been hospitalized a few days earlier for an unspecified illness. Officials from Tepco disclosed Yoshida’s cancer eight days later.

So 9 months from unprecedented irradiation to cancer hospitalization. Sadly, that sounds about right.

One wonders how many other unreported cancer cases there are behind the media blackout surrounding the health aftereffects in the aftermath of Fukushima. One will find out in due course.